5 Enjoy Adventure Flying With the Amphibious Icon A5 - Comes With Its Own Trailer
Car video reviews:
Coverstory

You often hear about how you can achieve wonders with patience and skill, and determination to apply yourself to a task and stick with it. That’s what this is, besides being a very inspiring and awesome story.

Jack Bally, an aviation enthusiast and Vietnam vet, and carpenter by trade, is the designer and builder of what is probably the most impressive homebuilt B-17 replica you’re ever likely to see. They call it the Bally Bomber, and it’s a perfect fit for autoevolution’s American Month, the virtual party celebrating American ingenuity, dedication, and sheer level of awesome.

The Bally Bomber was completed in 2016 and officially introduced at the Experimental Aircraft Association’s 2018 AirVenture airshow in Oshkosh, Wisconsin (hat tip to Jalopnik). It’s a very convincing and well-executed 1:3 scale replica of a B-17G Flying Fortress warplane. B-17 is widely considered, throughout its many iterations, the most accomplished and impressive aerial weapon built in the United States.

As noted above, Jack Bally was a carpenter by trade, but his true love was aircraft. He was a regular with EAA for his impressive builds, most of which were one-engined kits. For what he said would be his last build, he decided to go for something “different.”

The idea came to him as many great ideas do: at the bottom of several pints of beer, he would recall laughing. He said he would build a replica plane that would have more than two engines, and he and his friends laughed about it. But the decision stuck with Jack and it would prove the incentive behind an 18-year project that became both incredibly challenging and a lot of fun.

Initially, Jack wanted to build a B-24 Liberator plane replica, but it proved impossible to scale down. He changed his focus to the B-17 and used a 1:9 scale B-17 R/C plane to draw his initial design, which was made a scale larger. Then, for the next 18 years, he kept working and touching up his creation, until it was completed and ready for its maiden flight in 2016.

Jack called it the Bally Bomber and he named friend and associate Richard Kosi as pilot. When the duo brought the replica to Oshkosh two years later, where it went on display and on a demonstration flight, Kosi had some 52 hours of flight on it, and he called it the greatest achievement of his career. Indeed, the Bally Bomber doesn’t just look good, but is actually fully functional.

It’s powered by four Hirth F-30 two-stroke four-cylinder air-cooled boxer engines, factory rated at 80 hp each but limited to 60 hp, delivering a combined output of 240 hp. At one point, Jack had them running at 45 hp. The plane is a single-seat that, as Jack intended it, handles much like a Cessna. It has a wingspan of 34 feet and 7 inches (1,054 cm), and is 25 feet long (762 cm). Kosi calls the Bally Bomber underpowered, but it still cruises at 110 knots.

The fuselage is aluminum riveted, entirely built by hand. There’s a retractable landing gear and most of the distinctive elements on the real-life Flying Fortress are present. The most startling difference is due to considerations of space: the cockpit is larger than it should have been, to allow for a grown man to sit inside and pilot the thing.

In the 2018 EAA video below, Jack says that, even though he put some 40,000 hours in the project and despite the many challenges faced, he has no idea where time flew because he had fun. The emotion in his voice as he says this is perhaps an even more beautiful thing than the plane, and that’s saying something. If you can ever talk about a project of love without falling into cliché, this is one such time.

Jack Bally passed away in the summer of 2020. His Bally Bomber lives on, although it has already changed hands (the second video below shows the new owner flying it at Oshkosh 2021). It continues to tell the story of one’s man dream, and the kind of determination and skill he put into making it real. 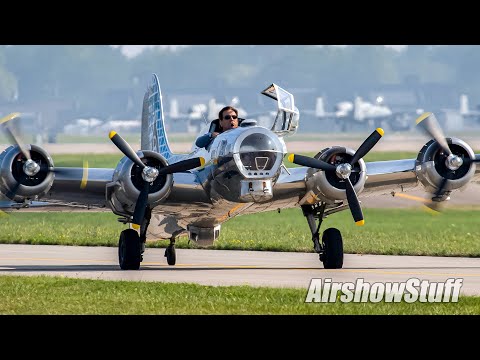 This Crusty 1950 Cadillac 62 Deserves a Second Chance and a Loving Home, Will It Be You?

Spacruzzi Is a Floating Hot Tub With Its Own Fireplace, for the Most Luxurious ExperienceSee all coverstories