5 The Rarest Chevrolet Camaro Ever Built Goes Out for a Spin, Flexes LS7 V8
Up Next

Badly Bruised Corvette C8 for Sale, Looks Like the Perfect Recipe for Insomnia

Vlad Radu
While it looked like a modified 1969 Camaro when it was unveiled at the 2005 SEMA Show, the 540 SuperCoupe was handbuilt from scratch to honor the Baldwin-Motion Phase III Camaros unleashed on the streets by the legendary tuner in the late 1960s.
12 photos

More than half a century ago, enthusiasts who wanted an American-built sports car with more muscle than the manufacturers could offer would pay a visit to dealership-based tuners like Yenko Chevrolet, Royal Pontiac, or Grand Spaulding Dodge. The first of the bunch became the most recognizable decades later, in large part because of builds such as the Super Camaros or the Corvair-based Stingers. However, many veterans of the golden age of muscle cars agree that the most outrageous street machines came from Baldwin-Motion.

Located in Long Island, NY, Baldwin Chevrolet was the place where most speed addicts went to get their fix. The dealership offered a range of unique, performance-oriented models that started life as stock Chevys but were delivered around the corner to Joel Rosen’s Motion Performance, where they received a thorough transformation limited only by the customer’s creativity and budget.

This collaboration gave birth to some outstanding builds, the most radical of which were the Phase III Corvettes, Chevelles, and Camaros that not only looked cool but could dominate both the street and the strip.

Sadly, the story took an unfortunate turn in the mid-1970s when the U.S. Environmental Protection Agency (EPA) launched an investigation into Motion Performance and its dribbling of factory emissions standards. Although some non-street legal cars were conceived after this scandal, the company never fully recovered, and Rosen eventually retired.

The legendary builder decided to come out of retirement three decades later and blessed us with another amazing ride: the 540 Super Coupe.

Revealed at the 2005 SEMA show in Las Vegas, the fire-spitting Camaro looked like a brilliant restomod honoring the Phase III builds of old, yet it was an entirely new car brimming with 21st-century tech.

Heavily based on the 1969 model, the wider and lower body was drawn up by renowned custom car designer Kris Horton. Every panel was handcrafted out of steel and welded to a custom tube chassis created by Phil Somers of Time Machines.

The Florida-based company also designed an unequal length double-wishbone front suspension system equipped with a bulky stabilizer bar and adjustable TNT Motorsports billet shocks. Unlike the original first-gen Camaro, the SuperCoupe came with an independent suspension at the rear, complete with hardened steel high-torque axles and a Dana 44 posi-traction central unit that could cope with the extreme power produced by the engine.

This brings us to the outrageous all-aluminum 540 ci (8.8-liter) Merlin/Motion big-block designed by none other than Joel Rosen himself. Built by World Products around its Merlin block, it came with forged, high-compression Mahle pistons and Eagle Specialties H-beam rods connected to a 4340 non-twist steel crank.

The V8 was topped off with fully ported Merlin aluminum heads, equipped with a COMP Cams valvetrain and a bespoke camshaft. Fuel was fed through a custom-built Kinsler Cross Ram sequential injection system with aluminum high-flow rails, an inline Weldon pump, and high-flow injectors.

Linked to a modified Tremec TKO600 five-speed, the unit could produce north of 700-hp in its final, dyno-tuned form, and with virtually all its components being either polished or chromed, it made jaws drop even before it was fired up.

Finished in a bright Motion Red paint with a silver stripe across the middle that paid homage to the original Phase III Camaros, the prototype that debuted at SEMA looked like the Ferrari of muscle cars. It sat on custom Bonspeed Intense wheels with Motion three-blade spinners wrapped in ridiculously fat Michelin Pilot Sport tires.

The bodywork was complemented by an equally red interior with a few chrome elements. Because of the gargantuan engine, rear suspension setup, and 20x12-inch rear wheels, there was only room for two six-way adjustable power seats with six-point harnesses, all covered in Cha Cha Red leather by Hoyt's Auto Upholstery. Instead of a rear bench, the SuperCoupe came with a custom Sony Xplod sound system with a two-channel amp and 10-inch subs.

Creature comforts were abundant despite the car’s visceral demeanor, as it was equipped with a Hot Rod air conditioning system, power windows, and one of those pop-out in-dash video units that were extremely popular at the time.

As you can imagine, this exceptional built stole the show at SEMA. It was such a success that General Motors gave the reborn Camaro its Best GM Vehicle Design award.

Fueled by the public's reaction, the initial plan was to develop 12 of these epic machines as part of an ultra-limited production series. Unfortunately, that never happened, and the show car, along with a second convertible prototype, was auctioned off at a Barrett-Jackson event in 2012, each fetching around $450,000.

Despite never making it into production, the handcrafted SuperCoupe was a custom-built masterpiece and a worthy tribute to the most rabid muscle cars of the golden era.

Thanks to MyRide.com, you can take a virtual tour of the beast by watching the YouTube video below posted on their official channel. 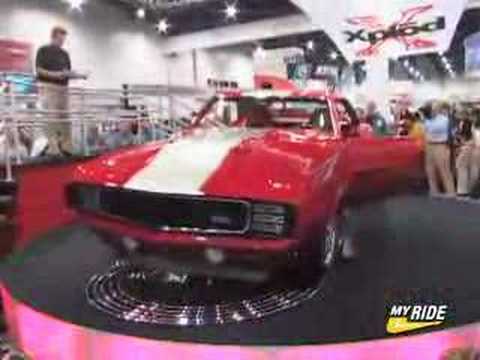