2 The Damaged Porsche 911s of Daniel Arsham, or How Destroying Cars Is Art

This stripped down and reloaded 911 is the creation of master restorer Michael Lightbourn. With backing from Arc Studio, he’s taken a lost relic and brought it back to life as a beefier reincarnation.

Baja-Ready Porsche 911 Looks Like It’s Straight Out of Mad Max, Without the Junk

Every now and again, someone gets an idea that seems to be right up my own alley. I recently came across this wonderful 1969 Porsche 911. But this isn't just any Porsche 911, its fully equipped to take on Baja. Honestly, when’s the last time you’ve ever seen anything like this?

Just to get an idea of what it is we’re looking at, let's do a quick comparison between this and the original 911 this desert rat is based on. We know that the original model was an air-cooled flat six engine pushing out 140 HP at 6,500 rpm and a torque of 129 lb-ft at 4,500 rpm.

It was a groundbreaking rear-engine, rear-wheel drive sports car. In comparison to other sports cars of the era, the Porsche came out as one of the more affordable versions. With a height of 51.97 in (1.32 m) and wheelbase of 89.29 in (2.268 m), this little rocket was and is still perfect for zipping through tight turns and narrow streets.

Someone even thought it would be good on a Baja track. That someone being Michael Lightbourn. Backed with funding from Arc Studio for the 2017 SEMA event, Michael, an automotive restorer, took this once lost 911 and turned it into the Baja buggy you see today.

But not much is original anymore, except the body. Everything else has been modified, tuned, and made ready for the brutal journey it’s meant for. Everything has seen a personal touch. From the most obvious wheels, to a higher ground clearance, and even the engine, all of it is Baja-ready.

The original flat-six engine has been swapped with a 2.3 liter flat four from Volkswagen. Air-cooled engines are preferred amongst Baja drivers for a couple of reasons. In comparison with liquid-cooled engines, air-cooled engines allow many cooling components to be eliminated from the build. This in turn reduces the amount of possible mechanical failure, but also keeps weight down to a minimum. Some custom builds for this type of engine have seen an output of over 200 HP. Four open exhausts push out of the engine compartment.

A manual four-speed transmission is just perfect for this type of ride. It allows you to call upon the strength you need when and where you need it. All this power is directed into 15-inch (38 cm) wheels with 30-inch (76 cm) tires. Just looks at the knobs on those Maxxis Bighorns. You know they’ll get you through the Baja.

For further safety and weight reduction, the 911 has all glass components, except the windshield, removed. To make sure that it will safely get you to the next checkpoint, a full roll cage and independent suspension are part of the mix. The front wheels each have single Exit shock absorbers for suspension, while the rear uses a twin shock system. Makes sense if you take into consideration that the weight of the engine is on the rear.

Inside, more stripping has occurred. Only two racing bucket seats are available, a steering wheel, some gauges, side intrusion bars, and a fuel cell is all you’ll find.

It was even up for sale on E-bay recently. If you want it, find out who bought it and make an unbeatable offer. 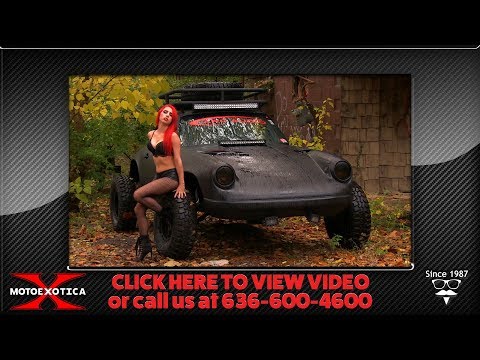