4 Self-Driving Robocar Will Be Your Personal Assistant, Doesn't Need a Steering Wheel

5 Google Rival Baidu Has Made an AI Chip for Autonomous Driving and More
Car video reviews:
Up Next

Rick Ross Has New Gold Wheels for His 1968 Cadillac, They Match the Steering Wheel

It’s been approximately two years since Chinese tech company Baidu launched its Apollo Go self-driving taxi service that relies on a growing fleet of autonomous robotaxis. Its network of autonomous vehicles has now expanded to 10 first-tier cities in China, with more than one million orders being taken so far. Now, Baidu announces its sixth generation AV (autonomous vehicle), the Apollo RT6, a state-of-the-art computer on wheels, set to speed up the driverless mobility movement.
6 photos

Unlike Baidu’s previous generations of self-driving cars, the Apollo RT6 model was not created by retrofitting conventional vehicles. Instead, it was developed from the ground up, being specifically built for fully autonomous driving and designed for complex urban environments.

The RT6 comes with a detachable steering wheel, allowing you to choose how you want to use the robocar: with or without one. This also unlocks space for a more versatile in-car experience, giving you more freedom in configuring the interior of the vehicle. You can install extra seating, vending machines, desktops, or even gaming consoles.

Apollo RT6 is 4760 mm (187.4”) long, with a wheelbase of 2830 mm (111.4”), offering comfortable rides, plenty of legroom in the back, a flat floor, and independent rear seating. It is packed with sensors on the sunroof, along with interactive lights, and has smart, electric, sliding doors. The AV has 38 sensors, including 8 LiDARs and 12 cameras.

This technological marvel is a state-of-the-art computer on wheels, integrating Baidu’s advanced L4 autonomous driving system, which is powered by automotive-grade dual computing units with a computing power of up to 1200 TOPS (trillions of operations per second), as explained by Baidu.

Apollo RT6 was unveiled yesterday, at the company’s Baidu World 2022 tech conference, as a production-ready model. It is scheduled to enter operation in China next year and has a cost per unit of $37,000. This affordable price gives Baidu the confidence that it will be able to deploy tens of thousands of AVs across China, creating a future in which robotaxis will be at half the cost of a taxi today. 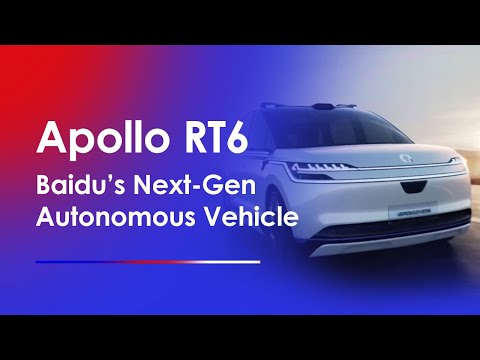