1 Thief Brags on Facebook Live About "His New Wheels," Gets Caught by Police

3 Incompetent Burglar Gets Stuck In Snow, Asks Victim For Help

Let's face it: ATMs are kind of asking for it. They're essentially big piles of cash left out in the street to test the moral resolve of everybody that walks past them.
4 photos

If you're the kind of guy who thinks the law is just a vague directive and that rules are there to be broken, you're bound to want to make a withdrawal without the use of a credit card at some time. But the thing is even though they sit there unattended, ATMs are pretty tough nuts to crack. Not to mention to pick up and run away with.

That's why this guy in Prince George, Maryland, thought about using a backhoe for the job. He actually came up with a pretty complex plan - much like the ones needed for the Grand Theft Auto V heists, where you first have to gather the necessary equipment, and only then execute the robbery.

Much like Michael, Trevor, and Franklin, this guy also began by getting himself a backhoe. Obviously, he took the time to go through the tutorial, because once the ATM was in sight, he looked like he knew what he was doing. He reversed the vehicle into position, he deployed the stabilizers and lowered the front loader bucket and then started bashing the poor cash machine with the dipper arm.

The CCTV footage released shows only about a minute of the massacre, but we would be surprised if the man gave up so fast after going to all this length to procure the machinery. In the end, though, he came out empty-handed. What's more, he also managed to inflict $10,000 worth of damage to the ATM and its surroundings.

According to WTOP, the Prince George's County Police believes this is the same man that broke into a Marlboro Pike tobacco shop through the roof last March leaving with an ATM and 250 cartons of cigarettes. Well, if they don't manage to get him over the next two months or so, they needn't bother anymore as he'll probably die of lung cancer anyway. 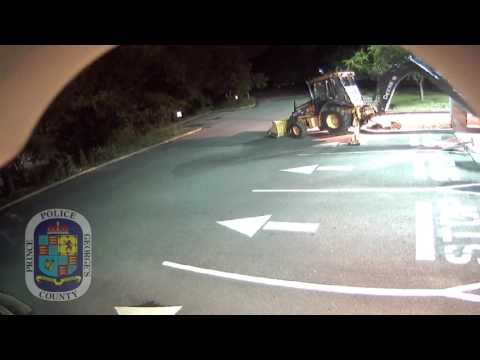