1 FrameBlock, the Anti-Theft Device that Integrates with Your Bike's Frame

5 Halfbike Sort of Reinvents the Wheel, Will Awake Your Natural Instinct to Move
Car video reviews:
Up Next

Introducing the BMW 7 Series in Camo, for now – Video

Apparently safety is one of the reasons people are still quite afraid to switch from car to bicycle in their daily trips. Regulations and separate lanes are sure helping with this issue, but a London, UK-based start-up claims they have found a way to solve this problem once and for all. The interesting part is the company uses the same safety feature applied in racing: the roll cage.
1 photo
The idea of this innovative shape apparently came after its inventor read a research conducted by Transport for London (TfL). It states that 65% of all fatalities in London are caused by trucks and buses cutting across the paths of cyclists, with similar figures in other busy cities in the world.

“Overnight I came up with the idea of a safety cell for a bicycle. It would be similar to the roll cage that racing cars have. For the first time ever on a bicycle you would be inside a safety cage and strapped in and wearing a seat belt – designed so you will be pushed away by a turning truck or bus – not crushed by it,” Crispin Sinclair, the creator of Babel Bike, explains in his Indiegogo campaign.

Think of it as the ultimate safety two-wheeler. Front and rear, built-in lights that come on automatically as soon as you start pedaling so that you’re always visible day or night are included. Indicators, hazard flashers plus brake lights, a loud car horn, and rearview mirrors are also part of Babel Bike's features.

The green commuter was designed with a 250-watt electric assist motor with a 50 to 80 miles range. The top speed is limited to 20 mph in the US and 15.5 mph in the EU, according to regulations. You can also opt for the non-electric model, ride it like any other regular bike.

According to their Indiegogo campaign, the Babel Bikes are built from expensive parts, and the price reflects this. The Shimano electric motor model is priced at 2,999 pounds ($4,450), while the eight speeds and purely with pedal power version will set you back at 1,999 pounds ($2,970). 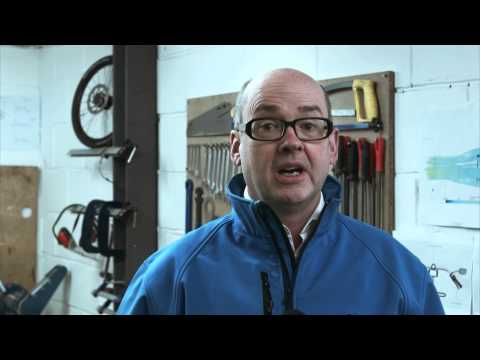