AWD BMW M4 Competition Hits the Track for a Timed Lap, Puts the Alpina B3 To Shame

Home > News > U-turn
Cristian Gnaticov
The all-new BMW M4 Competition Coupe xDrive was set loose at the track, for a timed lap. Sport Auto put Uwe Sener in the driver’s seat, equipped the car with Michelin Pilot Sport 4S tires, and timed it from start to finish at the Hockenheim GP.
6 photos

When the hypothetical chequered flag drop, the premium compact sports coupe, which is now available with an xDrive all-wheel drive system for the first time, did a 1:53.90. But what does this mean? Let’s take a look at FastestLaps for the answer.

BMW’s punchy all-weather machine, which has 503 hp produced by the twin-turbo 3.0-liter six-cylinder engine, came behind the mighty M5 CS, as well as the Carrera S variant of the new Porsche 911, which posted 1:53.60 and 1:53.40 respectively. The Audi R8 V10 Performance was a few tenths of a second quicker, and so was the M8 Competition. As for the fastest production car to have lapped the German track, unofficially that is, because these are all unofficial lap times, was the McLaren Senna, in 1:40.79, followed by the Mercedes-AMG GT Black Series and McLaren 720S, with 1:43.30 and 1:45.50 respectively. 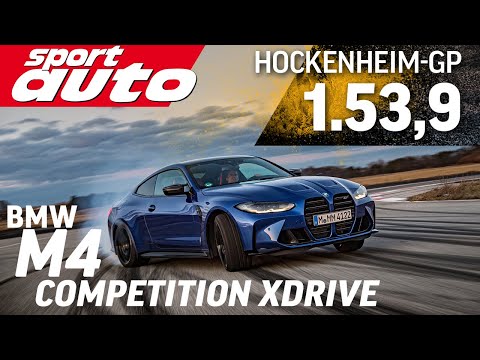