2 Will.I.Am Drives a Tesla Model S Not Even Its Mother Would Recognize

The Lamborghini Aventador has been around for quite a while now, and tuning specialist DMC stuck with it the entire time. This is their latest and most wild version, dubbed "as Americas."
15 photos

Of course, this is the latest in a long line of exceptional editions meant to preserve the exclusivity of the product. DMC will only make three of these, but they are undeniably just an improvement of the existing E-GT.

The stand-out feature of this transformation is the triangular carbon fiber scoop sitting on the engine deck. We don't know if it's really needed, but it can't hurt, right?

Of course, this V12 engine does need a bit more air than usual, and that's because it's been twin-turbocharged to 988 HP. Ok, that's a Golf GTI's worth of air, but previous DMC projects also had twin turbos, and they didn't need a scoop.

The amount of carbon fiber on this car is mind-boggling. Both the front and the rear bumpers are entirely new to match the hypercar personality given by that new engine deck, which is also carbon-trimmed.

A huge GT triumphs over the rear end design with its three pre-set positions - City, Corsa and Crazy Mode. So what you're saying is that it's not crazy all the time?

At the end of it all, you get a car that seems to resemble a spaceship. DMC’s CEO says that his design influences come from watching Japanese cartoons when he was a young kid – Captain Future and Gundam in particular. And apparently, this type of design is popular not only in Asia but also the Middle East.

To make these three Aventadors, DMC called on the help of a few other companies - Creative Bespoke USA, Fi Exhaust and Forgiato Wheels. Those are good choices if you ask us! 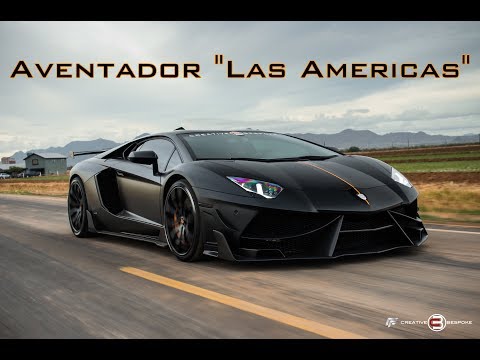