Autonomous driving is getting a lot of attention lately (again), and you can't help feeling it might be Tesla's fault (again). It's not that Elon Musk's company is doing something wrong in particular, it's just that it's the most vocal about its system, and that it's using a non-autonomous version of it in the cars already on the road.
1 photo
At the same time, Tesla is doing one more thing that's not exactly beneficial to the self-driving development effort: it's making it seem a lot easier than it really is. By constantly talking about how far ahead they are (despite failing to show any proof), the California-based carmaker is leaving the impression it has all but cracked the secret of AI driving, and it's just the legislation that's keeping it from rolling the technology to the public.

You don't need to be a rocket scientist (or a self-driving engineer, for the matter) to realize it's a very complicated affair that involves a lot of research and, above all, a lot of testing. However, the most frustrating part is seeing so many different carmakers and technology companies (and even small startups) wasting resources on countless programs that work toward the same goal instead of everybody joining their efforts and making it happen a lot quicker.

Speaking of startups, this unfortunate story involves precisely one of those called Phantom AI. A crew from TechCrunch was riding in the packed car - a modified Hyundai Genesis - together with two high-ranking officials from the creators of the semi-autonomous system - founder and CEO Hyunggi Cho, and President and co-founder Chan Kyu Lee.

The demonstration involved a Level 2 semi-autonomous system (similar to Tesla's Autopilot) that's able to maintain a safe distance from the car in front and keep the vehicle in its lane. With the feature active and the cruising speed set to 60 mph (97 km/h), a Nissan Rogue that was driving ahead of the test car braked violently to avoid colliding with a trash can that had fallen from a pickup truck.

Lee, who was taking up the driver's position, tried to stop the car in time, but failed to do so, hitting the SUV at 20 mph (32 km/h). In case you're wondering why the automatic safety system didn't kick in before Lee could sense the danger, the answer is it had been disabled for the demonstration because it was giving too many false alarms. Well, they will definitely think twice before doing that again.

The funny part is that, after all legal procedures were taken care of, the team went to ride in a Level 4 Genesis that Phantom AI had ready for the second part of the interview. Yes, after suffering a crash in a presumably more straightforward piece of equipment, the TechCrunch team decided to end the day by riding in a Level 4 autonomous test car. You can say whatever you like about them, but these guys have steel nuts.

Below you can watch two instances of the incident (with a camera facing toward the two front seats and another one filming the backseat), and if you're curious to see what Phantom AI had to say about the incident, you can read it in the "Press release" section. 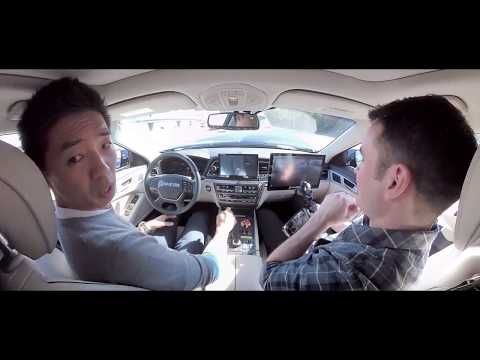