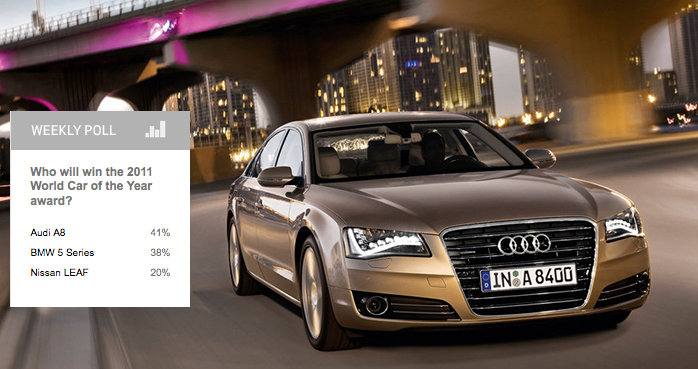 It seems that the 66 “top-level automotive journalists” coming from twenty-four countries who are part of the World Car of the Year jury panel were only right up to a point this year. To be more specific, they made the right choice when they selected the Audi A8, BMW 5 Series and the Nissan Leaf as being the top three finalists in the competition.

However, instead of choosing the Japanese EV as the 2011 World Car of the Year, they should’ve gone for the four ring-badged luxury saloon. At least, this is what our readers think. So, let’s get to the numbers.

We can’t help mentioning that we don’t see the Leaf as the WCOTY either. It may be great at playing the EV game, but the segment itself isn’t mature enough to be able to produce a car capable of claiming the aforementioned title.

We know that the electric vehicle has been killed and resurrected, but we don’t think that it’s time for vengeance. Just let EVs in the owen for a few more years and we’ll be back to talk about such achievements when they’re done...

Meanwhile, we're inviting you to influence the result of our new poll, which brings the fresh Beetle to your attention.