4 Toyota Hilux With Lexus V8 Engine Is Dakar Ready, Costs a Small Fortune
Up Next

Daniel Patrascu
It was at the end of last year when Audi announced its intention of fielding an electrified car in the infamous Dakar Rally in 2022. It’ll do that as it chases the title of the first carmaker to win the competition with an electrified drivetrain, just like it did not long ago in Le Mans.
13 photos

Enough time has passed since that announcement was made that we nearly forgot about it. Until today, that is, when the Germans spilled the beans on what this vehicle of theirs is all about.

First up, the name. Being an electrified contraption, the e-tron badge is of course used, attached to the end of the rest of the name, which is RS Q. It’s not an all-electric vehicle, as it would have been extremely difficult, borderline impossible, to recharge in the desert, but a combination of technologies that really makes it unique.

The RS Q e-tron uses motor-generator units (MGU) on both the front and rear axles to make the wheels spin. Audi says they’re the same MGUs presently deployed on the e-tron FE07 Formula E car, with some minor modifications.

A high-voltage, 50 kWh battery is, of course, on deck for energy needs, but this is not getting its juice from a plug, but from a TFSI engine, the same technology Audi has been using in another competition, DTM. The ICE, together with a third MGU, supplies power to the battery, as does simply braking the car, thanks to an energy recuperation system.

According to Audi, the “maximum system power of the e-drivetrain is 500 kW,” which would be 671 hp. German engineers are for now unsure how much of that power will be used during the competition. 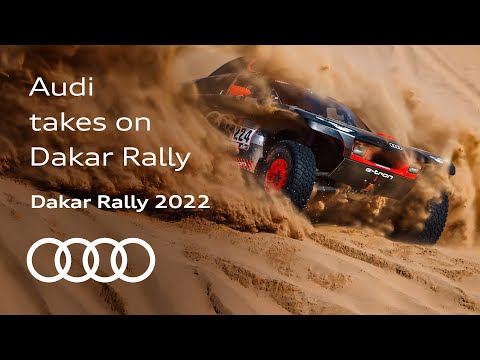