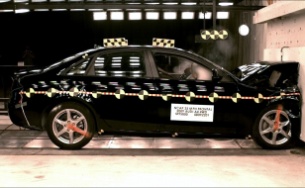 A five-star safety label won't save your life after drinking gazillions beers and letting your 10-year old son drive at 150 miles per hour (only sheer luck will come in handy in that case), but it does say a lot about the design and manufacturing quality of a certain model. It is for this reason that Audi has recently announced that its new and redesigned 2009 A4 luxury sport sedan has scored 5 stars for frontal, side and rollover crashes in the New Car Assessment Program, or NCAP.

While the US law requires all passenger cars to pass a 30 mph frontal crash test and a 33.5 mph side crash test, the National Highway Traffic Safety Administration, the authority in this field, gave the rating using tests conducted at 5 mph (8 kph) above that limit, which should be quite reassuring if you're behind the wheel.

Naturally, this achievement was good opportunity for Audi to come out with cheesy statements, like the ones quoted below.

“Unparalleled safety is a cornerstone of Audi’s new vehicle development and we are thrilled to see the A4 earn top marks in one of the toughest crash testing programs in the world,” said Audi of America Inc. Executive Vice President Johan de Nysschen. 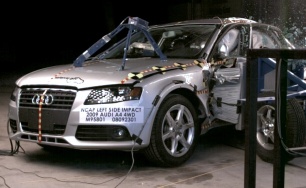 “Add this to other elements, including segment-leading fuel economy, engine performance, luxury features and size, which all prove the 2009 A4 is at the head of its class,” he added.

Powered by the 2.0-liter TFSI engine that generates 211 hp and 258-lbs-ft. of torque or the 3.2-liter engine produces 265 hp and 243 lbs-ft of torque and available to American buyers since late September, the A4 boasts safety features such as front, side and side-curtain airbags, dynamic steering system that helps stabilize the vehicle several times a second when it detects the car is exceeding its capabilities and adaptive cruise control, which spots a vehicle ahead of the A4 and adapts the speed accordingly. Some of the options might depend on the trim level, but that is a story for another time.