Audi SQ8 Spied at the Nurburgring, Sounds Like a 4.0 TFSI

Mihnea Radu
About six months to a year after the debut of a regular model, Audi reveals its S sports model. Today, we're going to look at the SQ8, which has been spotted undergoing track testing.
1 photo
Even though it has the highest number, the Q8 is not a flagship SUV in the same sense as the A8 is a flagship car. However, it's been received tremendously well, which makes the more profitable performance models even more important.

The RS Q8 will eventually become the R8 of SUVs with its Lamborghini-mirroring twin-turbo V8 setup. Meanwhile, the S8 will bridge the gap between the RS and regular models.

The specifications of this model aren't yet clear. Audi did say in its press release that a 4.0 TDI will be available in the Q8 range, so there's that to look forward to, a 435 horsepower electrically charged diesel. However, there's also supposed to be a TFSI version because you can't sell TDI in America.

In the past, Audi would have fitted this with a de-tuned V8, like Porsche recently did with the Panamera GTS. However, the Q8 Sport concept had a hybrid V6 setup that unlike anything else they currently make. Will they put that into production or just use the RS4 engine? All should be revealed during the first months of 2019.

This Nurburgring spy video adds precious little information to the equation. But we might be witnessing the workings of an air suspension system and all-wheel-steering as the SQ8 corners, which is hardly surprising considering you can get them on the regular Q8.

What's interesting is that the soundtrack is distinctly V8-like, quite similar to the old S6 and S7. We don't think this is an active exhaust system either since it's never this loud on the SQ7. So what do you guys think of a 460 horsepower 4.0 TFSI under the hood of this thing? 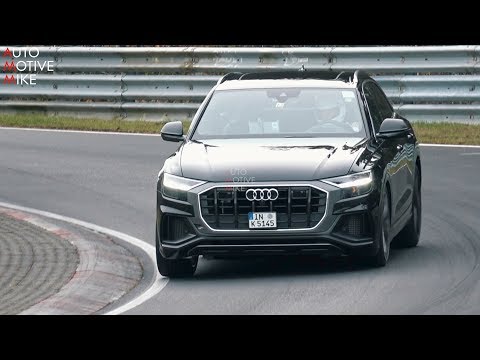