Vlad Mitrache
Let's talk about the Ferrari F40 a little. The limited-edition supercar from Maranello one held the record for the fastest production car in the world with its 324 km/h (201 mph) top speed.
1 photo
It had 478 hp and 577 Nm (424 lb-ft) obtained from a 3.0-liter mid-mounted twin-turbo V8 engine, and the dry weight of the car was 1,100 kilograms (2,425 pounds). This enabled the Ferrari to reach 100 km/h from a standstill in a more than decent 4.2 seconds.

The F40 was first built in 1984, so it's over 30 years old now. Fair enough, that's a very long time by automotive industry standards, so let's take a look at something a little bit more modern. Something like the Audi R8 V10 quattro. As the name suggests, the supercar from Ingolstadt has a V10 engine (5.2-liter) that develops 540 hp, which are then sent to all four wheels via a seven-speed automatic transmission. Reaching 100 km/h (62 mph) only takes 3.5 seconds, but there's a way to go even faster.

Audi also offers the R8 V10 Plus version, which is basically the same car but with more power squeezed out of the V10 FSI engine. 70 hp more, to be exact, pushing the overall number to 610 hp. That'll be enough to shave 0.3 seconds off the 0-100 km/h sprint, giving the R8 V10 Plus a very respectable 3.2 seconds official time. However, when it's not so preoccupied with things like sound or the actual number of cylinders, Audi has other means of obtaining more or less the same amount of power from a different engine.

The Audi S8 Plus is, by all means, an outrageous vehicle. It is, by definition, a luxury limousine, but by nature, it's a lot quicker than most sports cars out there, and even plenty of modern supercars. The top-of-the-line A8 uses a 4.0-liter twin-turbo V8 engine good for 605 hp, but this immense power also has to struggle with the two tons weight of the car.

The official performance figure for the acceleration run reads 3.8, but an independent body testing the car claims to have done it in 3.4 seconds. The video does not show the telemetry data, so we're left with the sole option of taking their word for it. They do say that it was a one-time only, and later runs could not do better than 3.5 seconds.

So, where does the F40 come into all this? Well, that the thing: it doesn't. 30 years later and the sleek 80's supercar would lose in a drag race with a chunky limousine. It's still the much more expensive and the harder to get of the two, but that's definitely not due to its acceleration performance. 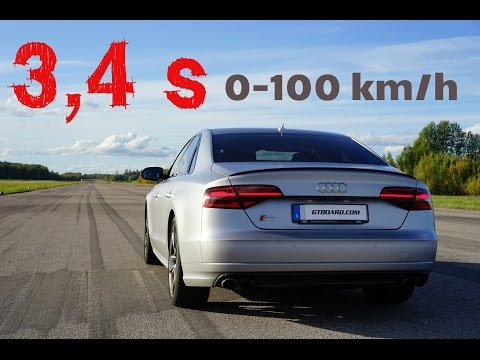