The development of fast Audis seems to have stagnated. After all, the all-new RS6 makes about the same power as it did before and the new S4, S5, and S6 all use a 3-liter diesel instead of a V6 or a V8 TFSI. But you should never judge a book by what kind of pump it uses at the gas station.
1 photo
American buyers aren't allowed to have any diesel performance cars, which is a shame because the new S4 has an interesting setup. The 3.0 TDI not only has a lot of turbocharging but also gets an electric compressor for a boost at low rpm.

The result is 347 hp and about 40% more torque than the TFSI-powered S4 that came before. Germany is one of the few places in the world where you can drive a fast Audi at its top speed. But this S4 TDI can never be as fast as an RS4, can it?

Well, we're about to find out, thanks to a four-way drag race but together by the British magazine Carwow. Going up against the S4 is an RS4 B7, basically, a 10-year-old model which had the V8 from the base R8. The fact that this comes with a manual seems like an unfair handicap, but Audi autos of that era weren't that fast anyway.

Anyway, despite being down by about 70 horsepower, the S4 TDI wins its portion of the drag race. However, the true performance champions here would be an RS3 and an RS5 Sportback, which kind of have their own drag race going on.

The RS5 has the now-familiar 2.9-liter bi-turbo V6 making 450 hp, so just 30 more than the old RS4. But being turbocharged, it's got torque and straight-line acceleration. It wins the drag race overall, followed closely by the cheaper, smaller, but equally impressive RS3. 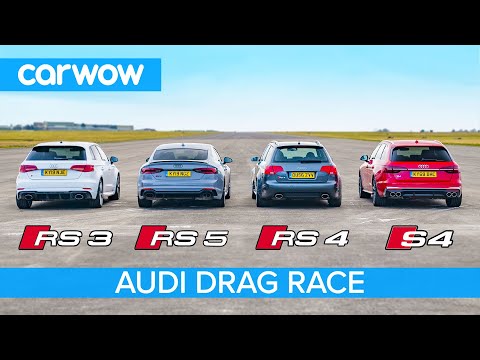