3 Next Opel Corsa OPC Could Be an Electric Hot Hatch

5 2020 Peugeot 208 Fully Revealed, to Debut in Geneva with Electric Variant
Car video reviews:
Up Next

Audi S3 vs. Mercedes-AMG A35: Acceleration and Exhaust Sound Battle

The entry-level AMG model has already faced off against the Audi S3 and Golf R, losing to both. But every repeat of those races proves the outcome was real.
1 photo
Today, we don't have have a drag race, but this is actually better. The Audi S3 and A35 are just spliced together into one video - same driver, same conditions and everything measured using an app. This setup eliminates reaction times, which play a big part in drag racing result.

But first, the specs. Both cars use 2-liter turbo engines, just like every other important hot hatch... except the new Megane RS and Focus ST. The S3 has an unfair advantage because it's the 2018 model with 310 as opposed to just 300 for the 2019 unit. Meanwhile, the A35 produces 306 HP.

The gap suggested by the official specs is real, with the A35 getting to 100 km/h in 4.9 seconds. It's not a bad time, but the S3 is a little quicker. We've got to cut AMG some slack; this is a high-tech car with a lot of heavy equipment, so it's going to be a little slower.

Mercedes kick-started the hyper hatch market with its savage A45 back in 2013. Its little brother has a couple of advantages, such as being cheaper, boasting a better interior and a 4Matic system that engages quicker. But the all-new A45 will take the game to the next level with its drift mode and 420+ HP output.

So what about the sound aspect? We don't want to seem biased, so we'll leave it up to the YouTube comments. Most say it's pretty close but the S3 offers slightly better pops. A new S3 has already begun testing and should come out in late 2020. 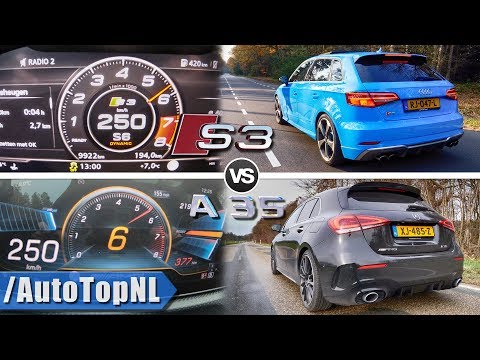