1 Audi S1 With Tracks Playing on a Beach is Bewitching

Audi S1 With Tracks Playing on a Beach is Bewitching

We've seen plenty of people fitting tracks to their Jeeps. They look pretty cool, but beyond that, the technology is about as useful as a snowmobile in California.
5 photos

Jeeps are pretty big and top-heavy; so are the numerous other SUVs that have tried out the tank thing, like that Touareg from VW Sweden. So you never get to see them thrashed like a tank. Not so with the Audi S1.

The smallest S model ever made is a pig by supermini standards, but that's because it's the only one that's been fitted with AWD. Such a feature seems relatively pointless when you consider the 231 horsepower its 2-liter turbo makes. However, when equipped with tracks and left to frolick on the beach, it looks right at home.

We don't know anything about the project, but those tracks don't look like the ones we've seen until now. And unlike the Jeeps, this doesn't resemble a simple DIY fit. Both the front and the rear bumpers had to be cut. Fortunately, the shape of the tracks doesn't require any fender cutting, but the suspension has apparently been lifted a few inches.

This engine is relatively similar to the one in the Golf GTI, and it makes a lot of torque. That's probably why one of the front tracks appears to be raising upwards, almost like a new form of torque steer.

Audi did quite a lot of engineering to make the S1 happen. The rear suspension had to be completely reworked because the torsion beam rear end wouldn't allow for the quattro system to be installed. This takes the form of a Haldex coupling that picks up the power from the front, but only when the car senses the front wheels are being overwhelmed.

We're pretty sure the owner also had some custom pipes installed. But compared to changes required by the track system, that seems like a cheap mod. 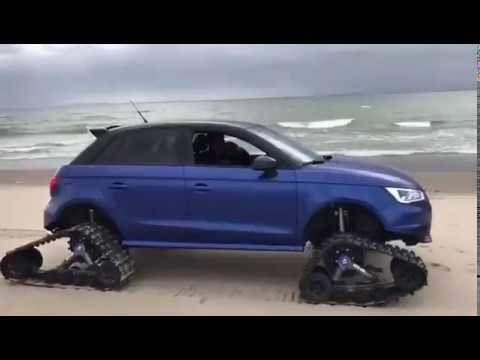