Mihnea Radu
Judging from the number of digital tuning projects, we'd say the new Audi RS6 Avant is a hit. The unique combination of sober, angular styling, wide hips, and a powerful V8 engine makes this an awe-inspiring machine that people want to take to the next level.
23 photos

We've seen a few interesting tuning projects in the real world. The best one is probably the RS6-R by ABT Sportline, which has 730 horsepower (740 PS) and a unique race car look. But there are certain things that are difficult to pull off, and that's where 3D modelers come in.

This particular project is our favorite at the moment, the creation of artist Hycade. He deliberately tried to combine the styling of the RS6 with the uniform of one of the most famous types of fictional soldiers, the Star Wars "stormtroopers."

While the new movies weren't very well received within the Star Wars community, the new stormtrooper uniform created by the First Order is undeniably cool. And we're reminded of this battle cladding when looking at the widebody RS6. The purposeful front end has large intakes finished in black, while vents next to the headlights let you know just how much the wagon has grown in size.

At the back, we see similar vents and a quad exhaust system, just like on the ABT RS6-R. We think the makeover may have been inspired by a crazy Audi limited-edition car, the A1 Clubsport, which also looked like a stormtrooper helmet. It's the only modern quattro we can think of with red headlight accents, a black taillight surround, and twin wings over the trunk. If we remember correctly, they made 333 of those, and we'd be delighted if Audi did the same with an RS6 Clubsport edition just like this.

But there are a few major hurdles in the way. For example, the rear wings and doors would have to be re-engineered, and Audi never does that just for the sake of styling. Also, the company will probably be pooling all its performance resources into Tesla rivals by the end of the decade. 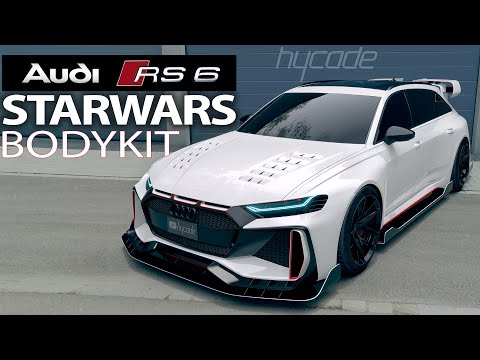