In this world, there’s one particular place where everyone can upload a video of them doing some stupid stuff. Some of us abuse this privilege and the worst part is that they get away with it. Take AutoExpress’ latest drag race, for example.
1 photo
If anyone capable had been put in charge of organizing it, the results would’ve been a lot closer to reality but since nobody bothered to make things fair to everyone, we ended up with the video below. This feels like a rant? Well, it should.

What annoyed me about what you’re about to see is how unfair the whole thing is to the M4. In any other drag race, organized by anyone else and in entirely different conditions, the Audi RS5 would’ve been beaten to a crisp in 90 percent of cases but this time, it walked it all the way up to the finish line. Why, you ask? Because someone thought that it would be fair to pit a turbocharged rear-wheel drive car against an all-wheel drive one on wet tarmac.

Ok, we know it rains quite often in England and that this sort of situation might be more often than not but still... This is in no way fair. Oh, and who was driving the M4 if you don’t mind me asking? Mr. Magoo?

In the end, the RS5 won it and by more than a second. The runner up was the M4 that, after sliding its rear end for quite some time and then came the E92 M3 as expected. Why are we saying that? Well, let’s take a look at the specs, shall we?

What’s your take on the whole thing? Was this biased against the BMWs or not? 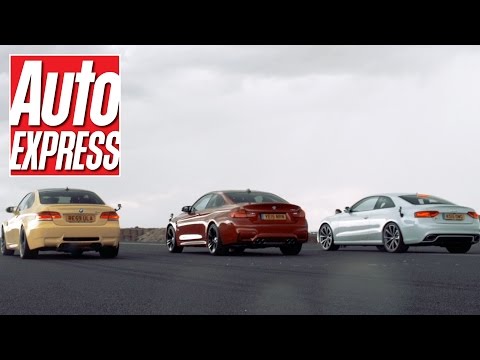