We will admit that there are hot hatchbacks that can keep up with the basic Ferrari model, such as the California T or the old 458 Italia. However, it always feels like they don't belong together in a race.
3 photos

I mean, just take the Audi RS3 sedan as an example. You can be really cruel and say it's jumped up VW Jetta because it rides on the universal MQB platform. the smallest Audi sedan is made at a regular factory with relatively conventional materials. Sure, they're using a bit more aluminum, but that's not something to write home about.

The core of what makes it go super-fast is the 2.5 TFSI engine, a legendary five-cylinder unit with 400 horsepower and a launch control system designed for quick launches. The advantages of quattro all-wheel-drive should be noted, though not when your rival is the Ferrari 488 Pista. This is not the Ferrari you see at rental companies!

It's one of Ferrari's finest tools ever, producing 720 horsepower and 770 Nm of torque. It has a 0 to 100 km/h sprint time that would worry even some hypercars (under 3 seconds), despite only allowing the rear tires to put the power down. And it costs about six time more than the RS3 before you add juicy track-focused options. We mention all this because the outcome of the race is not what you expect.

The RS3 launches instantly while the Ferrari driver seems to be taking his sweet time and never catches up, despite the long runway.  Still, you're probably never going to see a race between these two.

A lot of other contenders were also present at the 2019 Petrolhead Spring Events in Germany. For example, the Audi goes up against a more fitting opponent in the old A45 AMG, which it destroys immediately. A heavy standard RS6 is also no match, which we already knew. 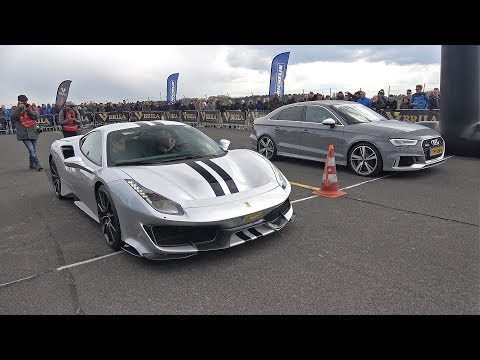