1 Audi S1 With Tracks Playing on a Beach is Bewitching

4 Schwedenkreuz Terror: Onboard Video Shows Audi A3 Nurburgring Near Crash

There are a lot of things you can do with a fast car on a closed road - most notably, go really, really fast - but you rarely get to experience what it's like being a pigeon or something else with wings.
1 photo
Most people go about their entire lives without ever lifting all four wheels off the ground at the same time outside a workshop, and that's because regular roads are built in such a way to prevent it. Maintaining contact between the tires and the asphalt is crucial for safe driving, and we all know that everyday driving is all about safety.

When you're behind the wheel of a 400 hp Audi RS3, however, you might feel like doing a bit of mischief. The super hot hatch from Ingolstadt has that quality of bringing out the hooligan in you - the one that wants to let the exhaust rip even though it's one a.m. and you're on a residential street.

It's not just the unusual amount of power for such a car available at your disposal, but also the handling. The new RS3 is improved in that respect, and coupled with the quattro four-wheel-drive system, that means you can have more fun than ever on the twisty bits.

Mat from Carwow is more than happy to demonstrate, and thanks to a GoPro stuck on his head, we get to experience it as well. The POV video starts with him climbing into the sports seats, but things quickly get a lot more interesting as Mat demonstrates the RS3's acceleration.

Coming off a series of bends to a sudden crest on the road, Mat finds the time to ask rhetorically whether he could get some air over the bump. The speedometer jumps from 83 mph to 125 mph in a fraction of a second as the wheels spin freely in the air while our host for the ride launches into a chain of expletives, followed by uncontrollable giggles.

The giggling doesn't stop soon, so Mat calls it a day and pulls over. He hides his excitement by talking a bit about the RS3's interior, but you can tell he's still high on the adrenaline rush from that jump. Sadly, a POV video on YouTube isn't going to have the same effect on its viewers, but it's still pretty damn cool to watch. As is the car. 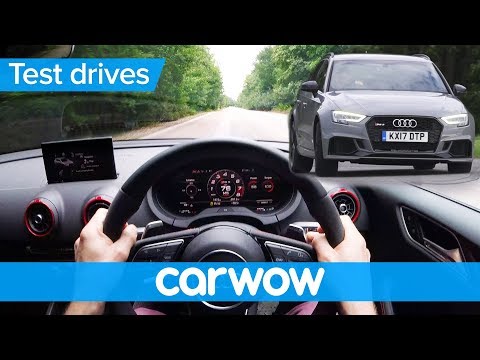