There's a new fastback in town, bearing the performance accrediting letters sealed with four intertwined blacked-out rings of Audi. The RS5 Sportback Competition is out and about, with an official unveiling in Spain, and it means business - with a price tag to match.

This new dark-side knight is ready for a bullfight, thwarting competition with two turbos strapped to a 2.9-liter V6. All four wheels work hard under the ruthless rule of the eight-speed Triptonic to push the black-clad German to 62 mph (100 kph) in 3.9 official Audi seconds.

Naturally, the engine is electronically limited and pulls the reins on its 444 bhp (450 PS) after the 180-mph mark (290 kph). The 442 lb-ft (600 Nm) torque will make an impression, as will the carbon ceramic brakes and massive engine roar at full throttle.

Courtesy of Audi's big vlogging fan and Youtuber Auditography, we have a cinematic video with the RS5 Sportback Competition. The car lost some weight from the firewall - 17.6 lb (eight kilos) – to allow a more in-depth engine sound experience in the cabin.

But this Audi is not (just) about the engine noise, for a completely new Quattro sport differential is not that keen to play dramatic music without a show. And coil-over suspension (optional) lowers the ride by 0.8 inches (20 mm) compared to a regular RS5. Software tweaks in the transmission control unit put the rear axle in the spo(r)tlight, and the new RS exhaust system lets everyone know about the new kid on the block.

And the newcomer doesn't lay on its predecessors' laurels – despite what Audi claim in terms of 0-62 mph times, the tested version of this quick wake to reality is slightly different. A 3.27-second time for the standard standing start - almost half a second better than what the manufacturer advertises – is quite a gain.

That might just as well be a marketing gimmick to draw attention – they put out one number, and reality is vastly overcoming that expectation. However, the RS5 Sportback Competition package has the upper hand over its twin brother, the RS5 Sportback, with one-tenth of a second faster time.

We mentioned the carbon ceramic brakes earlier – they're optional but give the power to hit a dead stop from 62 mph (100 kph) just under seven feet (two meters) earlier than a regular RS5. Six-piston calipers at the front and single-piston at the rear complete the sharp look and behavior of the car.

Speaking of demeanor, the RS5 keeps its Competition package to itself, but it hints at what's what In terms of mechanical prowess. Matte-black tailpipes and 20-inch mill-cut bi-color wheels show signs of stray genes in the RS5 DNA. Carbon is matted on the front splitter, rear diffuser, and side mirror housing – Audi calls this the Black optic package (and it puts it as standard). Blacked-out front logo rings, badging, and roof – all optional – do little to take away the glamour from this hefty RS5 Sportback.

To further enhance the Competition nuances, a Sebring Black color is available exclusively for this trim – see it in the gallery, but be warned that, although it's called Black, it's a deep dark shade of blue. All this outside darkness creeps on the inside, with just some red stitching and accent lines underlying the seats, seatbelts, floor mats, doors, steering wheel, shift lever, and center console.

However, there's a price to be paid for this messenger of the Shade. It comes in the very ludicrous form of cash - $ 119,640 for the top-of-the-range configuration. The Competition package alone is $11,400, and the base model 2023 RS5 starts at $93,400. Not at all a bargain, whichever way we look at it, especially when compared to its internal competitor, the S5, which starts at $66,800. 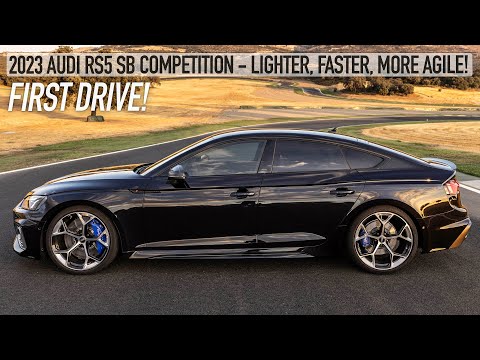