2 High Mileage Audi A4 Cabriolet May Play Games With Your Wallet, It Might Also Be Awesome

4 Tuned Audi RS Q8 Doesn't Give a Flying Hoot About the Lamborghini Urus, Costs Less Too

5 Ken Block Gets Hit by Bad Luck at Pikes Peak, 1,400-HP Porsche Is off the Grid
Car video reviews:
Coverstory

It wasn't long ago that Mat Watson raced a RS 3 Sedan against the Audi Quattro S1 in a quarter-mile (402 meters) challenge. But now he's brought out a slightly more capable, modern Audi to take on the legendary race car. Although these vehicles are almost 40 years apart, figuring out who's going to win might not be as easy as it sounds. As always, after three tests, we will know the outcome.
10 photos

The last time around, the RS 3 was overwhelmed by the old Group B car. It lost the standing quarter-mile race by 0.2 seconds, and the rolling race wasn't any better. The Quattro S1 had the upper hand in terms of horsepower and weight, but it had the disadvantage of a manual gearbox and a lower torque figure.

This time, the situation is about to change. Mat has brought out an Audi R8 V10 Performance Spyder. That means he's got access to 612 horsepower and 428 lb-ft (580 Nm) of torque.

For the first run, Mat Watson instantly takes the lead in a rather surprising turn of events. But it turns out to be a short-lived victory. For the next two runs, the Quattro S1 is victorious as soon as it launches off the line. Granted, the gap between the two cars isn't that big by the end of it all, but the race car is still in front.

Comparing its result to the one in the race against the RS 3, you can notice one thing: it's 0.8 seconds faster to the finish line than it was before. And the R8 is 0.1 seconds slower by the end of the run. Still, 35 years of evolution can't just pass unnoticed.

And after three rolling start runs, the outcome is obvious. There's no room for nostalgia in a quarter-mile challenge, and the Quattro S1 just can't outrun the R8 to the half-mile (804 meters) marker. Needless to say, the braking test isn't going to do it much good either. 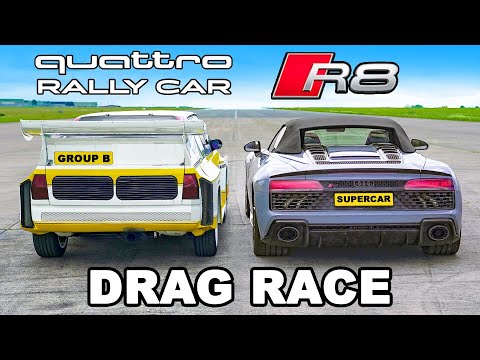