Mihnea Radu
Audi is undoubtedly going to pull the plug on the R8 after just two generations, and we're not happy about that. Sure, it's not the perfect driver's car and it lacks some of that exotic character Lamborghinis have. But the concept of a German supercar should have been way more successful.
17 photos

Italian supercars were known for being unreliable and sometimes difficult to drive. In comes, Audi with a mid-engined machine initially offered with a 4.2-liter V8. It was decent, but not a supercar, more of a Porsche 911 rival.

Of course, the second-gen R8 wasn't pulling its punches when it arrived at the beginning of 2015. It had an angular design and only came with a V10, which eventually reached 600 horsepower. But eventually, people lost interest, and we think it comes down to two things, the price and the lack of development resources.

Audi seems to suffer from ADHD. One year, it's developing gigantic V8 or even V12 TDI engines, the next all the money is in electric cars. And even though its RS models are the talk of the town, they often lag behind AMG rivals in terms of development time and cost. There's only one true sports SUV, the RS Q8, and both BMW M and AMG offer at least two flavors of each car.

One interesting example would be the AMG GT, which can also be described as a German supercar. They developed the GT S, the GT C, the R, and eventually the Black Series. That last one is a real monster. While most AMG GTs cost less than $200,000, the $400,000 Black Series version is going after for buyers who have diamond-encrusted everything.

That's what the Audi R8 needed, a Black Series version that cost twice as much as the original. And that's what we have in this rendered video from YouTuber Hycade, a German supercar that's been taken to new extremes.

The widebody kit is visible from a mile away, featuring fenders that bulge out like a race car. The front end has been designed with a larger set of intakes and a spoiler that looks like it doesn't belong on a road.

At the back, a giant wing unashamedly makes its presence felt. A new exhaust system has been installed, with four tips and obvious titanium construction. This element of the rendering somehow reminds us of Bugatti, both the Chiron and the EB110 before that. 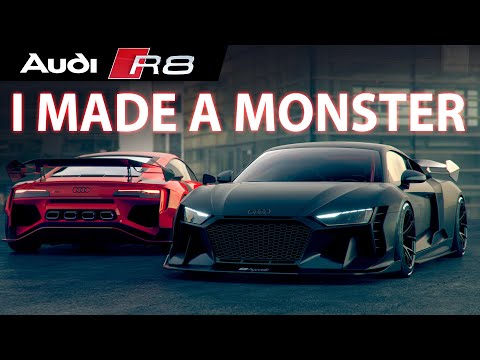