3 This Forest Junkyard Is Packed With Rare Volkswagens, Including Golf GTIs

5 Remembering the Audi Quattro S1 E2, the Most Iconic Group B Rally Car
Car video reviews:
Up Next

Audi's inline-five-cylinder motor turns 45 years old in 2022, and the German marque has plenty of iconic models that had it under their hood. Those that managed to cement the reputation of the brand were built a while ago, back in the 1980s and the early 1990s.
9 photos

Now, TV shows back then did not come in the level of quality and detail that you have come to expect from YouTube videos. Fortunately for us, Audi has a heritage fleet, and a drag race with all the relevant turbocharged five-cylinder models from the 1980s and 1990s was organized.

The folks over at Carwow got an immense opportunity to film something like this, as Audi does not take museum exhibits out of its vaults on a day-to-day basis, not to mention letting people do drag races in them. Some vehicles were driven by Audi employees, as these were too valuable to be left in the hands of someone outside the company.

For example, Audi's S1 quattro race car, which was driven both by Stig Blomqvist and Walter Rohrl, with the latter rolling it in an event over three decades ago, was only handled by a single person for the entire time it was away from the museum. It was insured for GPB 1.7 million, so it is understandable why nobody else was allowed to get behind the wheel.

Fortunately, since the Brits film these drag races on an airstrip, it is significantly safer to put one of these vehicles there than it is on the open road.

The biggest risk in the case of the latter is not necessarily the driver of the rare vehicle, but rather everyone else on the road. Fortunately, all these examples came back home without any damage after this, so maybe will get to see more content made with them by other journalists.

With that being written, can anyone guess, off the bat, what is the quarter-mile time of the 1985 Audi S1 quattro race car? Do not worry, you will get the answer in the video, so go ahead and watch it below. 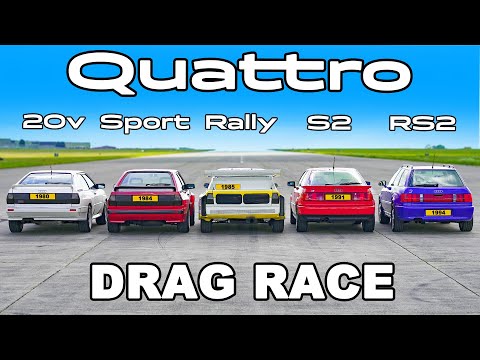