2 Third-Gen Chevy Caprice on 26s Ain’t No Donk, But Its Predecessor Was

4 Corvette C3 Goes for the OMG Looks With 30-Inch Wheels, Other Mods

5 Rapper’s Custom Bentley Bentayga Is One Trippie Car, Can You Guess the Owner?
Coverstory

Home > News > U-turn
Cristian Gnaticov
In case you haven’t figured it out by now, we’re not exactly fans of oversized wheels. However, that’s where a chunk of the tuning world is heading to these days, and with so many followers, we simply cannot ignore the trend.
12 photos

We’ve already shown you a lot of such vehicles with cut fenders to make room for the ginormous alloys, tweaked suspensions, and other mods. Nonetheless, you’ve probably never seen so many of them in one place than in the video shared at the bottom of the page.

Shot last weekend at the Park and Chill car meet in Orlando, Florida, it puts the spotlight on numerous cars infected by the tuning virus. Among them, one stands out, because it was developed in Europe and used to be a rather fine and comfortable cruiser, until its owner decided that it would look better with big wheels.

The red Audi Q7 in question, which is a first generation model, has spinners that are probably around 30 inches in diameter. A first-gen BMW X6 is also briefly featured on film, with the big wheels becoming the focus of the camera lens.

From angry-looking Jeeps to jacked-up sedans with big wheels, aftermarket stereos, and others, the clip, which is 9 and a half minutes long, showcases other vehicles, from the classic and modern eras. Some of them came to life in America, others in Europe and Japan, and most of them have something in common: they have been tuned by for faster sprints off-the-line or show-and-tell purposes.

So, if you want to see what’s considered fashionable in today’s Florida car world, then you are only a mouse-click away from it all. Oh, while you’re at it, you may want to name your favorite. For this writer, it’d probably be that chameleon Maserati Ghibli shown at the 3:47 mark – hey, don’t judge me, okay? 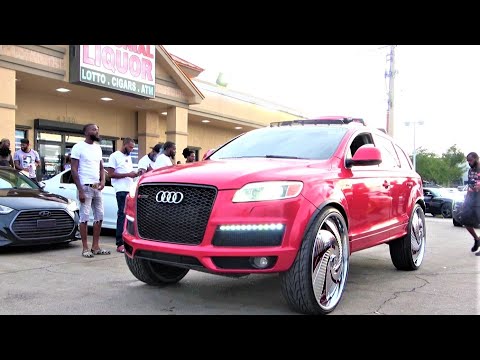