1 Guy Provokes a Quad ATV to a Rodeo in the Snow, Loses

2 Nissan GT-R Reminds Us Why Winter Can Be Fun with Snow, Flames and Donuts

3 Everything’s Different When Driving on Snow. Except for the Accidents

Audi A6 Avant Won’t Wait for the Snow Plough, Becomes One

It has been postulated many times that winter is the only time when SUVs and all-wheel-drive cars begin to make sense. That wouldn’t explain why a lot of them can be found in places like Dubai and Qatar, where it hardly ever rains, but the statement does bear some truth to it.
1 photo
Since a very negligible percent of SUV owners actually take their cars off-road, their high ground clearance and all-wheel-drive ability go to waste most of the time. That’s why their drivers attack any higher-than-natural sidewalk curb like a pack of wolves - for a short and insignificant second, it justifies the investment they made.

But winter - assuming it snows, of course - makes it all better. When the asphalt is covered by a sound-absorbing layer of snow, the 4WD cars put on their smug faces to match those of their owners and start showing the rest of us how it’s done. That is, if they also put the right type of tires.

We lack the statistics to prove it, but we’re willing to bet it’s also the time of year when most accidents occur for this type of vehicles. Having better grip than others when accelerating can sometimes make you forget that god created all of us equal when braking. Well, some may be even “less equal” than others, considering most 4WD vehicles tend to be heavier.

But the guy driving the Audi A6 Avant in the clip below couldn’t have felt anything else but pride while he was going around what looked like a severe roadblock on a snow-covered road. Only he wasn’t going on the road. We have no idea what kind of tires he was using, but his feat is impressive regardless. If he needs to have his wipers on to see where he’s going, that means the snow layer was pretty high.

Normally, overtaking on the right side (or on the curb side, to avoid any right-hand/left-hand driving debate) isn’t the nicest thing you can do, but we’ll let this one go because it’s really cool and it didn’t interfere with anybody’s business. Also, kudos to that old Audi A6 Avant for clearing the way for all the other cars to follow - which we assume is what happened next. 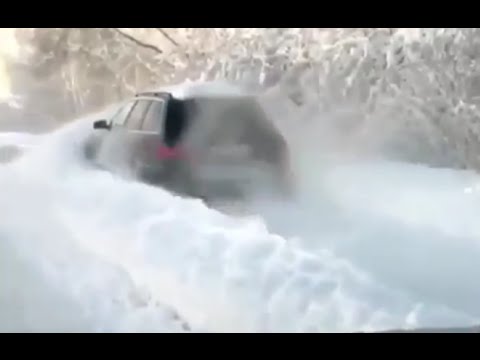