5 Crazy DIY Wheeler Is a True Tactic Bike Made From 147 Nuts, It Is Perfectly Rideable
Up Next

Cristian Curmei
We've heard of steel bikes, and we've read about carbon fiber bikes, but what happens when you mix the two materials together into one luscious and ground-pounding two-wheeler? Well, something along the lines of the Audax.
15 photos

If you've never heard of a cycling team named Bombtrack, you aren't alone. If you have caught this name whispered among the crowds, you probably like to dabble in BMX biking. That's because the minds and hands behind the Audax, Bombtrack, are part of a German BMX designer and manufacturer named WeThePeople. Oh, and WeThePeople is the sort of crew that builds bikes meant to be ridden by pro athletes.

However, you don't need to be a world-class athlete to ride the Audax; a €2,850 ($3,000 at current exchange rates) trinket, according to Bike Radar, is designed to do things your average road and gravel bike can't do. Yes, it can even excel in an urban setting. How all that happens is the object of discussion today.

Now, I mentioned that the Audax is a machine that blends carbon fiber and steel into one smooth criminal. However, don't expect the frame to be built from carbon fiber; steel is at work here, and only the fork is made from carbon fiber. But that begs the question: Why is steel the framework?

Well, over the years, steel has been pushed aside for the more favored aluminum and carbon fiber. However, recent times have seen a resurgence in this material's use as technology has advanced too. Couple that with some of the dynamic properties of this metal, and the results are typically machines that can take all sorts of abuse.

It's this tolerance to abuse that Bombtrack has exploited with this one, and all that starts with the frame design. The lack of any suspension tells you that this bike is meant to have both wheels on the ground at all times, and while that may sound like a bummer, it isn't; Bombtrack has taken special care to make the Audax suitable for as many different roads as possible.

For example, the presence of 47C tires means that you can easily rock some gravel routes with it, even tackle good ol' singletrack, and then return to a road surface again. The baseline build that Bombtrack shows off includes a WTB ByWay tire on the front and a WTB Horizon at the back, but if you want something more rugged, tires tend to be rather inexpensive to change.

As for the drivetrain, Shimano is the chosen manufacturer and supplies an 11-34T cassette with 11 speeds, an Ultegra rear derailleur, and an FD-R7000 front derailleur sitting on a 48/32T chainring. The brakes are Shimano, too, with 160-millimeter (6.3-inches) rotors and clearly hydraulic. As for the rest of this bugger, Ritchey Comp gear can be seen all over the place. Top-shelf stuff, I tell you, and no, that's not the end of this bike's magic.

By now, you've realized that the Audax has the audacity to do whatever it wants. Well, to push the limits even further than you typically would with a bike, Bombtrack has lined the frame and fork with more rack and water bottle mounts than I can keep track of. The goal? Simply to help you ride further than ever before, and once you've reached the end of your powers, unload some of your camping gear and sleep for the night. The next morning, you wake up, enjoy the view over breakfast, and off you go, homebound. Did I mention that a medium size bike only weighs 10.8 kilograms (24 pounds)?

What does all that amount to? Nothing more than a two-wheeler that's worth considering for this year's Christmas. 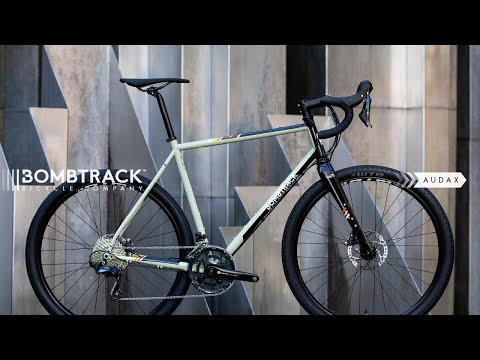