1 The World's Most Powerful Luxury SUV Roars Off the Production Line, Packs 697 HP

5 Sebastian Vettel Could Retire at the End of the Season After a Horrible Start for Aston
Car video reviews:
Up Next

Codenamed Nebula, then renamed AM-RB 001, the Valkyrie is Aston Martin’s first true hypercar. Unveiled with much pomp and circumstance in 2016, the Cosworth-powered engineering marvel is rocking a big V12.
16 photos

As opposed to the Formula 1-derived turbo V6 in the Mercedes-AMG ONE, this fellow is equipped with a free-breathing V12 that harks back to F1 cars from the good ol’ days. RA is the internal designation of this engine, which started out as a three-cylinder prototype with a displacement of 1.6 liters.

Filmed in the wet at the Mugello Circuit in Italy by car spotter 19Bozzy92, the Valkyrie is much obliged to rev to 11,100 revolutions per minute. Peak output is developed at 10,500 revolutions per minute to the tune of 1,000 horsepower. With the help of the KERS-inspired hybrid boost system, the Valkyrie produces a simply insane 1,160 horsepower. Peak torque, on the other hand, is officially rated at 664 pound-feet (900 Nm) at 6,000 rpm.

Limited to 150 units for the coupe, 85 units of the targa-topped spider, and 25 units for the AMR Pro track-only bruiser, the Valkyrie was masterminded by Adrian Newey, the chief technical officer of Red Bull Racing. Aston Martin’s former design director Miles Nurnberger, who has recently left Dacia, had a big say as well. But still, just look at it! That’s Newey 101 there!

Tipping the scales at just over a metric ton, of which the engine weighs 206 kilograms (454 pounds), the aero-focused hypercar generates in the ballpark of 4,000 pounds (1,814 kilograms) of downforce at high speed. Capable of 60 miles per hour (97 kilometers per hour) in 2.5 seconds, the Valkyrie also happens to be tremendously fast. The spider, for example, is rated at 217 mph (350 kph) with the roof on or 205 mph (330 kph) with the roof off.

Priced at $3.2 million, the limited-run hypercar is already sold out. 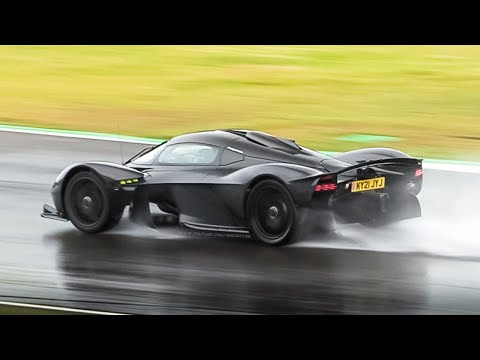