Aston Martin DBX SUV Will Not Embarrass You Off-Road, Stops Better Than It Goes

Vlad Mitrache
Aston Martin is relying on its first SUV model to salvage its slumping sales and keep the company afloat, and given the current environment, you could say it couldn't have picked a better model for it.
40 photos

Despite all the talk of global warming and the need for more efficient transportation, SUV sales keep growing, and if recent decisions from certain manufacturers are anything to go by, it looks like the trend is set to carry on over the next few years at the least. You just know things are bad when Ford decides to stick the legendary Mustang nameplate on a crossover, and an electric one to boot.

Well, what may seem like bad news to everyone who's not convinced by the advantages of a high-riding vehicle, is pure gold for Aston Martin. The British carmaker has just launched the production of its first-ever SUV - which also happens to be the company's first all-wheel-drive model - so the promise of high volume sales is exactly what the people high in the hierarchy want to hear.

However, there's always the question of just how good of an SUV is a vehicle from a company that's only ever built sports cars and GTs going to be? Well, not that it matters all that much since the classic line about no DBX owner ever taking their vehicle off-road is truer than ever, but the answer is pretty encouraging.

Carwow's Mat Watson drove the fresh DBX over an off-road course (laid by the manufacturer's representatives, it's worth pointing out) and is happy to share his findings with all of us. It would seem the more-rugged-than-usual Aston Martin can hold its own in most off-road conditions save for some serious rock-crawling. There, its limited approach and departure angles, as well as its ground clearance (despite gaining an impressive 5 cm - 2 inches - thanks to the air suspension), would hold it back severely.

Yes, it's the kind of vehicle where you're encouraged to let the electronics do most of the work, but that's only because the carmaker doesn't trust your off-roading skills (and why should it?) and rightly thinks that keeping the expensive DBX in one piece is more important than finding out if you can clear an obstacle on yourself or not.

As always in these situations, tire choice is also important. However, considering the Aston Martin DBX comes with 22-inch wheels, it's not like you'll be able to install off-road rubber even if, for some reason, you wanted to. Scaling down the wheel size isn't an option either because they hide some seriously big brakes: 410 mm (16.1 inches) discs at the front and 390 mm (15.3 inches) at the back.

Which brings us to Mat testing the new DBX's braking system. After failing to impress the Carwow presenter with its acceleration - though he 4.0-liter twin-turbo AMG-sourced V8 engine pumps out 550 hp and 700 Nm (516 lb-ft) for an official 0-60 mph (0-97 kph) sprint time of 4.3 seconds (Mat's instruments read an even more flattering result of 4.09 seconds) - it's the way the SUV came to a complete halt from 70 mph that won him over and made him claim the car "stops even better than it goes." We're not entirely sure whether that's a compliment or not.

There's no doubt the Aston Martin DBX looks like a viable option in the ever-more-crowded segment of luxury SUVs, but you should keep something in mind while watching the clip below: Mat is British, and the Brits tend to be pretty protective of their domestic brands, especially when they come up with a truly good product. So, if this feels like an advertisement at times, just look past it and try to evaluate the DBX more objectively yourself. 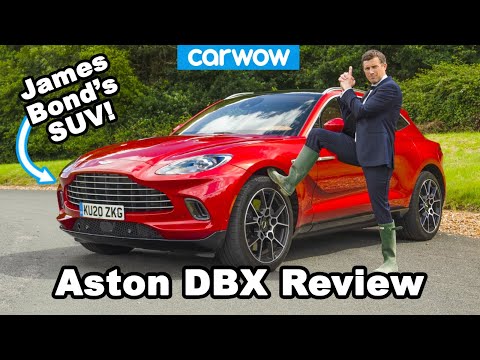