Some would say that imagination works in mysterious ways. Others might easily draw parallels to natural occurrences. And when it comes to automotive virtual artists, there are always a lot of them.
20 photos

For example, whenever a major new model gets introduced, there is a sudden uptick of interest. Certain pixel masters love to play with bespoke creations. Others, not so much. Or, at least, those unique projects stem from reality and then get reinterpreted into something fresh.

For example, the virtual artist better known as theottle on social media traveled back in time to 2013 when Bertone and Aston Martin presented a Rapide Jet 2+2 at Geneva. One would say that is an interesting jump to an awfully specific moment. And that it is a little surprising someone even reminded a one-off shooting brake manufactured in collaboration with Gruppo Bertone.

Alas, Aston Martin fans would not be so surprised. After all, the British luxury sports car builder just presented the world’s highest-powered luxury performance SUV, the DBX707. And even though this CGI expert did not mention it specifically, the result certainly comes with ample high-performance vibes to at least suspect a potential triggering connection. Especially when seen from the rear.

Interestingly, the pixel master specifically chose the 2013 Aston Martin Rapide Bertone Jet 2+2 to imagine a potential revival for a production shooting brake. And inspiration came from an unexpected direction since Aston Martin is not in cahoots with Porsche – but rather with Mercedes-AMG.

Nevertheless, following public advice, he chose the Panamera Sport Turismo as the base layer instead of the Mercedes-Benz CLS Shooting Brake for the Aston Martin DBX transformation. The finished CGI product looks quirky indeed, as the Panamera still perspires from under the DBX attire, especially from the front.

And it is not even the first time someone has tried to remix the DBX into a shooting brake. Only that time around the 697-horsepower DBX707 connection was more than obvious and fully intended. 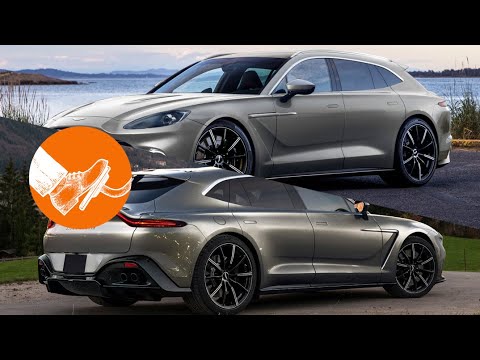