5 Here Are Some of the Most Expensive Billionaire Toys, According to Supercar Blondie
Car video reviews:
Up Next

Aston Martin DBX "Fuerte" Packs an 800 HP-Strong Punch, the Cheekbones to Take One

Some might say the DBX deserves everything bad that happens to it for becoming the model that transformed Aston Martin from a British company that made flawed but ultimately characterful sports cars into yet another builder of SUVs.
13 photos

The truth is, like others before it, the Gaydon-based unit might not have had much of a say in it as the only alternative would have been a one-way ticket to the depths of oblivion. Besides, is the DBX, the company's first and only SUV so far, really that bad?

Well, with a twin-turbo V8 engine putting out 550 horsepower, that question doesn't really require answering. However, the market is oversaturated with performance SUVs, which means the DBX would need a lot more than a decent power output to stand out.

How about a pair of carbon fiber cheekbones that look like a bad afterthought? Well, that's hardly ideal, but the two pieces of ultra-light material are the price you have to pay to gain access to DMC's "Fuerte" package and, considering everything it offers, it might not be such a bad deal after all. Besides, I'm pretty sure the German tuner will gladly forget to install them if the customer so desired.

The obvious highlight of the entire bundle is the magic worked on the 4.0-liter twin-turbo V8. Instead of the stock 550 horsepower, the "Fuerte" makes over 800 hp, which is a massive gain of nearly 50 percent. How do they do it? It's mostly down to larger turbos and a new ECU, but the sport filters, as well as the lightweight exhaust system, play their part too.

Visually, the "Fuerte" looks like the DBX's less aristocratic and more football hooligan twin brother. It gets those carbon fiber parts on the front bumper that are said to reduce turbulence and, I would hasten to add, reduce the time people spend looking at the car without a horrified expression on their face nearly to zero.

Despite the seemingly light touch, the tuner opted for (no widebody kit, for instance), the few added bits appear to have a great impact on the vehicle's character. The main culprit at the back is that menacing-looking air diffuser, but the classless act wouldn't be complete without the trunk and roof spoilers. I have absolutely nothing bad to say about the wheels, though, other than the fact that they seem to be smaller than the claimed 24 inches.

With no info regarding the price, is this a package any current or future Aston Martin DBX owner should consider? As far as I'm concerned, I would be very happy with the power increase if it could come without any of the appearance "enhancements," but I can also see why people might be willing to overlook those for a 250 hp hike in performance. After all, considering the plethora of options out there, you're already a bit of an eccentric if you chose the DBX in the first place. 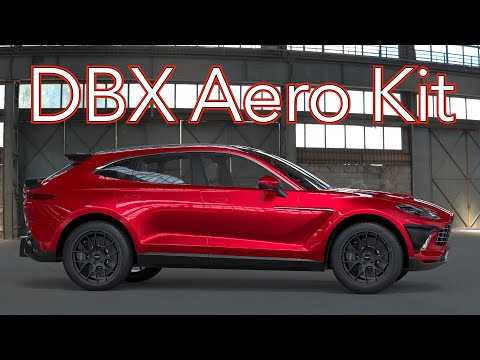