The DB11 is here; it's going to be with us for many years to come, and we think it's pretty cool. However, that should stop you from going straight to a tuner and asking for a body kit.
7 photos

Ahead of the 2018 Geneva Motor Show, we showed you the Startech version of the DB11, which had a 610 horsepower Brabus-tuned V8 engine. This isn't that; it's the green monster called Cyrus that Mansory finished just in time for GIMS.

Rather than sticking to the official photos from the tuner, we decided to delve deeper and find some cool videos. The shimmer of the green paint and the crisp carbon fiber kit deserve that kind of attention.

Mansory has also completely redesigned the front end with a new grille and a forged carbon air splitter. Not only does it bring the DB11 closer to the ground, but it also looks way more exotic than regular carbon. There's a similarly decked out Panamera which we plan to show you later.

The profile is defined by new carbon skirts that are vaguely reminiscent of the DBS. 22-inch wheels covered in low-profile tires fill out the fenders with a little help from a 35mm suspension drop. The rear, meanwhile, looks a lot like Ferraris's F12.

A metallic green paint job is matched to a silver roof. Mansory has even got their own brakes installed, but that's nothing compared to the interior. It's a combination of white leather with the most refreshing green carbon fiber we've ever seen. 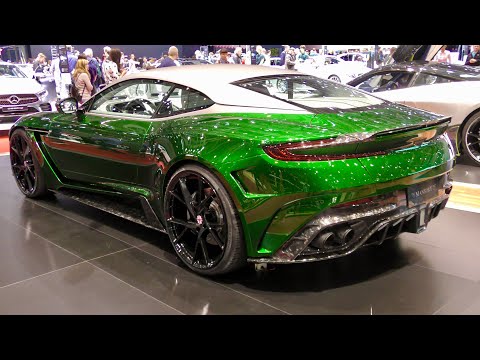