Aston Martin and James Bond, the Love Story of All Times. Don’t You Forget It

You think James Bond and an image automatically pops into your mind: a suave, not necessarily blue-eyed and blond gentleman, wearing the finest tailored suit and with the most gorgeous woman on his arm, smooth talking some evil mastermind before speeding off into the night. An Aston Martin is always invariably associated with that image.
12 photos

Aston Martin and James Bond have been as inseparable as peanut butter and jelly since the early days of the iconic movie franchise. Few other marques can boast such an enduring and famous association with a fictional character, and Aston Martin is making sure you don’t forget that.

After two years of delays due to the ongoing international health crisis, No Time to Die, the latest installment in the 007 franchise and the last one to star Daniel Craig as James Bond, is arriving in theaters. Hopefully. Aston Martin is using the increased momentum in the promo campaign to freshen up your memory with a montage of some of the most iconic and adrenaline-packed action scenes across the entire franchise. It’s aptly called “License to Thrill.”

Bond’s car is often referred to as the DB5 but, as any 007 fan or car enthusiast will tell you, he’s driven plenty of other Aston Martins as well, like the DBS, the V8 Vantage and the V12 Vanquish, the DBS V12 or the DB10. He’s also driven plenty of other cars, but some of those Aston Martins have made the cut here, though not the DBS Superleggera and Valhalla supercar. You have to wait for the film to come out to see those, so set your calendars for October 8, 2021.

You can see the video at the bottom of the page. At first sight, it’s only a very fast cut of various action scenes, but make no mistake: there is a backstory there, as well. This is a love letter from Aston Martin to James Bond, in honor of their time-defying love story. Aston Martin and 007, the modern Romeo and Juliet – but, you know, without the tragic ending, but plenty of angry revving and tire screeching. 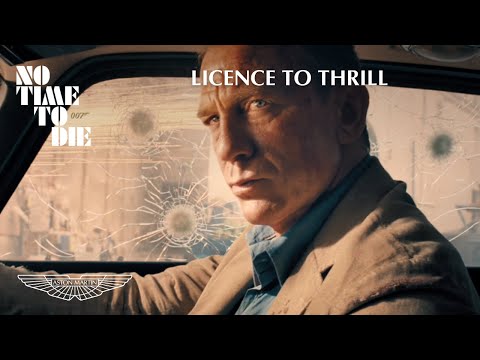 Editor's note: Photos in the gallery show images from the No Time to Die trailer.