1 En Route to Poke an Asteroid, DART Spacecraft Had a Baby

2 Here’s the Didymos Asteroid, Doesn’t Know Humans Have Bad Things Planned for It

5 NASA’s Bombing an Asteroid on September 26, We’re Promised No Threat to Earth
Car video reviews:
Up Next

Asteroid Takes a 14,000 MPH Punch From the Human Race, Suicidal DART Spacecraft Is No More

It’s been a long time coming, but finally, after years of work and months of travel, a spacecraft affectionately called DART is no more. That’s because it slammed at a speed of 14,000 miles per hour (22,530 kph) right into a small asteroid called Dimorphos. As planned.
8 photos

DART is short for Double Asteroid Redirection Test and is described by NASA as “the world’s first planetary defense technology demonstration.” That’s a fancy way of saying that humans are trying to change the course of an asteroid for the first time, in a proof-of-concept effort that one day might save us from extinction by means of killer rocks from space.

DART left Earth in November 2021, heading for an asteroid pair known as Didymos. Its target was the smaller Dimorphos that orbits the larger body, and the goal was to shift its orbit by a tiny fraction, showing nonetheless that it can be done.

According to the space agency, DART slammed into its target at 7:14 p.m. EDT, confirming “NASA can successfully navigate a spacecraft to intentionally collide with an asteroid to deflect it.”

By how much? Well, we mentioned a tiny fraction, and in NASA speak that amounts to about one percent, or ten minutes orbital time. It’s unclear at this point if that was achieved, and a lot of work needs to be done to confirm it.

The Didymos-Dimorphos pair is located 7 million miles (11 million km) away from our planet, so telescopes will be used to determine the orbital changes. The ejecta caused by the impact will be analyzed from afar as well.

In about four years’ time, the European Space Agency (ESA) will do a follow-up on the DART mission by sending another spacecraft, called HERA, to study the damage done by the NASA machine firsthand.

So, what all of the above means is that even if we know DART died on the job (video of that happening is attached below), as it should, it’ll be a while until we learn if its death meant anything. 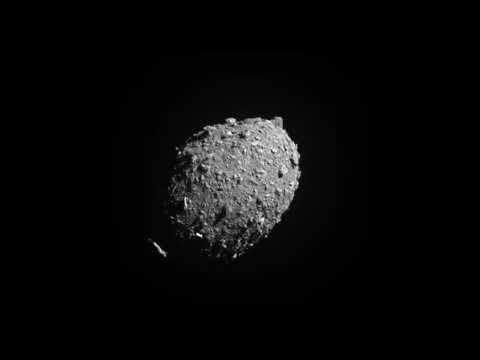