1 This Solution Acts Like a Sunscreen for the Streets, "Eats" the Smog Too

4 Road Repairs Go Around A Parked Car, This Is A Clear Case of "Not My Job, Bro"

5 WRC Tires Explained
Up Next

Cosmin Vasile
French developer Gameloft announced recently its Asphalt 9: Legends arcade racer is coming to more gaming platforms. If you haven’t yet played the game on your Android or iOS device, you can now take it for a spin on Xbox One and Xbox Series X/S.
7 photos

Just like the mobile version, Asphalt 9: Legends is available for free on the Xbox family, although it does offer in-app purchases and may have third-party ads that may direct you to third-party websites.

If you've been living under a rock and haven’t heard about Asphalt 9: Legends, a game that made its debut on Android and iOS three years ago, here is a quick rundown of what this arcade racer is all about.

Besides being able to upgrade each car unlocked, players can also customize their body paint, the rims, and wheels or apply different-looking body parts. Some cars allow you to change their carbon parts on the hood, trunk, and wings, while others cars are also convertibles.

The online multiplayer aspect lets you race against up to 7 other players from all over the world. During these races, you can earn extra points for your Club by drifting or performing stunts. Clubs act as guilds where you can invite your friends to play together, race in different locations and unlock rewards.

The Xbox version of the game includes an exclusive Xbox-themed decal, as well as cross-save and cross-play with the PC version of Asphalt 9: Legends. Also, exclusive to Xbox Series X, the game runs in native 4K and 120fps (frames per second). Aside from that, the Xbox game will have full content parity with the PC and mobile versions. 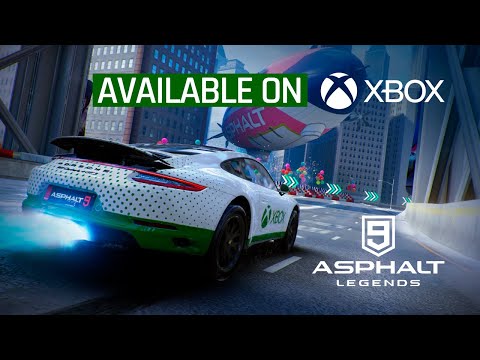