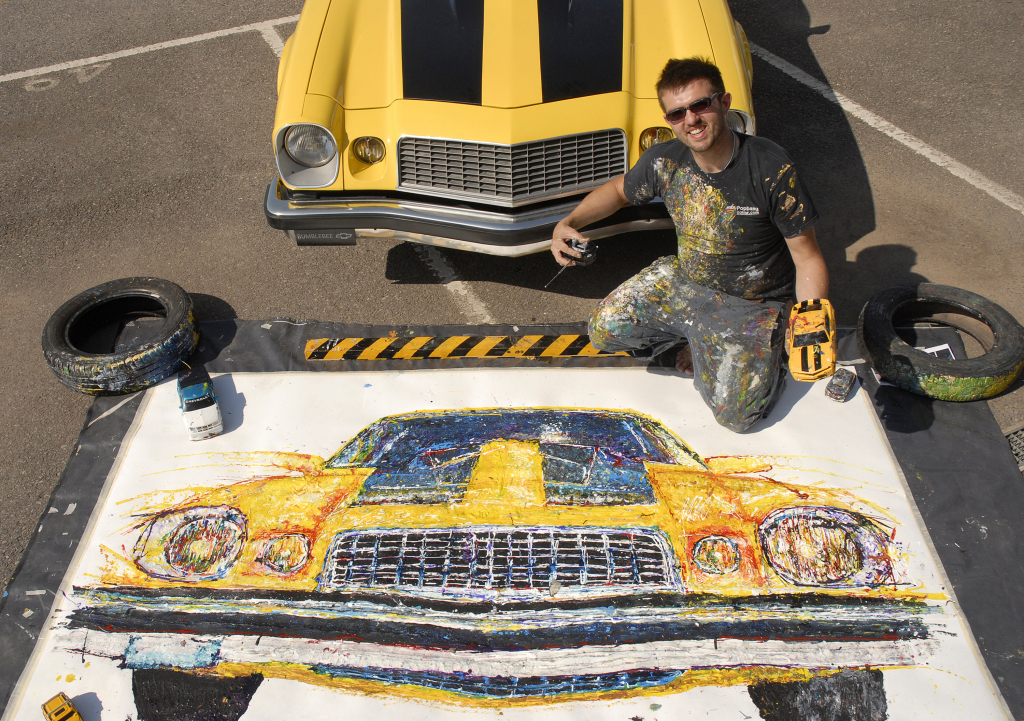 The Transformers movie continues to be a worldwide hit and anything related to it is welcomed by its fans. However, it’s the iconic Bumblebee character that became the most successful. From Bumblebee toys, to a live version of the Chevy Camaro and Suzuki B-King, the most beloved Autobot sells.

This ‘movie star’ even inspired artists like Ian Cook, who used it as his latest example of Popbang Auto Art. The 26-year old Birmingham-based artist used an open day at GM’s Heritage Centre in Luton, Beds, to create the Bumblebee image by driving remote control cars and rolling old car tires through paint, resulting in a piece of art.

“When I first heard that Bumblebee was available in the UK I knew I had to add the car to my portfolio,” said Ian, whose other artworks include images of Lewis Hamilton and Sir Stirling Moss, as well as a series of iconic cars from history. “It’s thrilling to create images of vehicles like this, as the colour, livery and sheer presence of the car make it hugely popular with the public.”

Bumblebee is the fifth Auto Art image of a Chevrolet created by Ian, whose first work with Chevrolet depicted the Camaro Convertible concept at the 2008 British International Motor Show. The artist also created images of the Beat concept car, Lacetti 2008 WTCC race car and, more recently, Rob Huff’s WTCC Cruze racing car at the UK round of the championship at Brands Hatch.

“Chevrolet is a globally recognised brand with a fabulous history, so it’s a real privilege for me to work alongside a company with such a great past and an interesting and vibrant future,” added Cook, who, according to a GM’s statement for the press, hopes to create more iconic Chevrolet images.