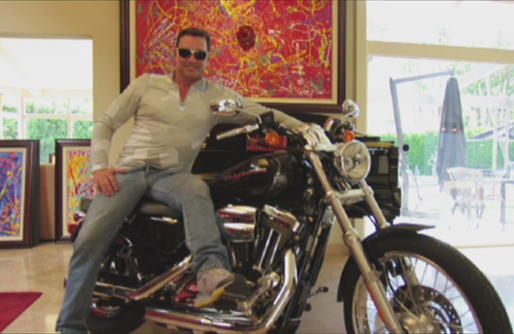 The Harley Davidson "dealer to the stars" in Marina Del Rey, California, recently announced it will host the unveiling of a million dollar Harley on October 21, 2010. Priced at $1,000,000, artist Jack Armstrong's "Cosmic Starship" Harley Davidson reportedly is the only motorcycle the artist will ever paint.

“John Travolta rode a Bartels Harley in the film Hogs, but Armstrong's million dollar Harley is a movie in itself,“ a statement from Bartels Harley Davidson reads.

Creator of the unique painting style called "Cosmic Extensionalism", Armstrong's trademark art combines extreme colors and textures. Words magically appear throughout his paintings when viewed at different angles with his bold signature JACK, often in the center.  Armstrong's "Cosmic Extensionalism," along with his three first edition art books titled: "Cosmic Dream Museum", "The Last Wizard" and "Star Trip" can be seen at JackArmstrongArtist.com.

"Andy Warhol would have loved it," states Armstrong. "He started with soup cans and worked up to Elizabeth Taylor! For me as an artist," he explains, "Harley is James Dean, Brando, Elvis and Steve McQueen, and is more American than ice cream. To paint a million dollar Harley is legendary, like the bike!"

According to Armstrong there will be a small sign placed next to the million dollar motorcycle saying, "If you are not Lady GaGa, Scarlett Johansson or Sylvester Stallone DO NOT TOUCH THIS HARLEY!"