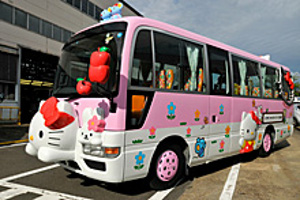 Some of you may not be familiar with the Hello Kitty phenomenon, so first let us introduce you to the Japanese fever: It’s a fictional character in the form of a female white bobtail cat with a red bow. Well, as hard to understand as it may be, the Hello Kitty trademark is generating more than $1 billion annually.

We’ve seen related car wraps or automotive accessories before, but who would have thought that a whole bus could be converted in a Hello Kitty tribute on wheels?

The video below show you a brief presentation of what the employees at Auto Works Kyoto (Japan) are capable of, including a glimpse at a Hello Kitty - themed bus complete with an outsized Kitty-chan head below the windshield.

“We disassemble the car from the trim line and make necessary changes for the metal body,” said Ikuo Shiomi, an AWK conversion specialist. “We are welding the body to install the frame and an additional door. The door installation is most important and difficult part for the metal body shop.”

Customized models, whether based on trucks, buses, or even motorhomes, are typically completed in a few weeks to four months depending on complexity.

“The conversion market in Japan is said to be around 100,000 to 150,000 vehicles per year. Thirty percent of which is light-commercial vehicles. We don’t think the Japan market will grow or shrink markedly,” said President Mitsuru Kanai. “Emerging markets such as countries in the Middle East and Asia are where we think the demand will grow. “