2 When Porsche Designs a Yacht, It Designs a “Spaceship on Water”

3 Enata’s Foiler Is a Flying Yacht, But Not Quite

5 This Aston Martin Penthouse in Miami Comes With Your Very Own Vulcan
Car video reviews:
Up Next

Sea levels are rising, but the solution to the problem is not to fight water but live on it. The idea isn’t exactly new, but here’s a first, concrete proposal towards helping man (and woman and their entire family, if need be) survive another biblical flood by literally riding it out.

The Arkup is the idea of French engineers Derouin and Arnaud Luguet, both of whom live in Miami, one of the areas considered most vulnerable to flooding due to the rising sea levels. It is a “house yacht” or a “floating villa,” a house that can float on water while also being fully sustainable and independent.

In case of rough waters or hurricanes, it can even rise above water using 4 hydraulic pilings that stabilize the house on the sea floor. The hydraulic system raises the Arkup above 30 feet above water, which is not much but enough to protect it from whatever Mother Nature throws at you. This, in combination with hurricane-proof floor-to-ceiling glass, makes the Arkup fit to survive a second flood of biblical proportions.

The Arkup is also a luxury villa, so you’re not getting just any type of humble abode in the deal. Considering it costs $5.5 million, it’d better be nice! The floating villa has 4,300-square-foot of living space, divided between 4 bedrooms, 1 living room, an open-area kitchen, 4.5 bathrooms, a swimming platform and a retractable deck. Furnished in a minimalist, sleek and elegant style, it blends ultimate luxury with practicality, for what is poised to be an efficient means of relocating at sea.

The roof is covered with 2,400 square feet of solar panels, which make it entirely independent in terms of electricity. The Arkup comes with a rainwater collection and purification system and a 4,000-gallon tank for storing fresh water. So, as long as you make sure you have enough food stored inside, you can easily live off the grid for long stretches.

“We can’t match the navigational capacity and speed of a yacht,” Nicolas Derouin told the Miami Herald earlier this year. “You couldn’t cruise around the world, but you could use Arkup in the Bahamas or British Virgin Islands, for example.”

Indeed, a yacht it is not. With a maximum speed of 7 knots and a range of 20 nautical miles, the Arkup was never meant as a viable alternative to a yacht, but a compromise between that and an actual home, mixing the best of both worlds.

“It’s more like a house than a boat but you never lose the unmistakable feeling that you’re on the water,” Derouin explained. “There is plenty of space, you never have to duck your head when moving around, and you don’t feel any rocking when you’re inside, which can’t be said for most yachts.”

Then, there is also the issue of the carbon footprint of a yacht or even a home, an issue that the Arkup doesn’t have. Because it generates its own electricity, which is used both inside the home and to power the two 100 kW / 272 hp electrical engines, and has the water purification system, it’s practically zero-emissions. So not only will it help you survive a massive flood, but it will do so without doing even more damage to the planet.

“A motor yacht is the opposite of sustainable,” Derouin says. “[Arkup] is zero emission, carbon neutral. In this house, you don’t need to rebuild your seawalls or move your air conditioner to higher ground. Compared to the costs of a waterfront home, Arkup is competitive.”

Be that as it may, the designers do admit the obvious: with the $5.5 million price tag, the Arkup is also a niche product for the time being. It may be competitive, entirely green and absolutely breathtaking in terms of design and performance, but it’s not something mere mortals can hope to buy.

At the same time, they’re convinced there is a way in which they can make floating houses for less well-off customers, like students or regular working Joes and Janes. Right now, the lowest they’ve been able to go with one of their floating yacht-type products is $2,300, so they do strive to offer a little something for every pocket. 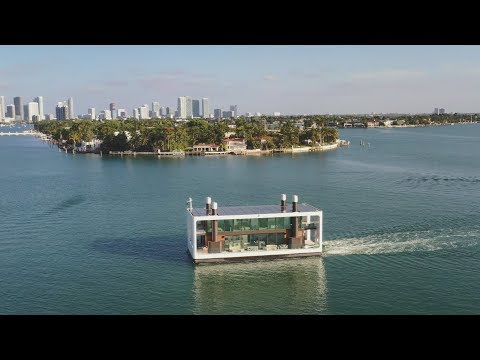 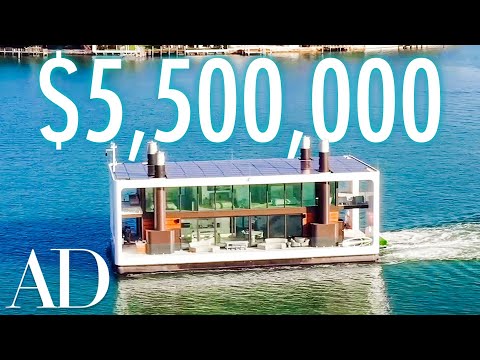