3 Wiz Khalifa Has a Blast on His Son's PowerRider 360, "These Are Our Toys"

5 Tilting Uready e-Trike Rides Like a Jet Ski on Asphalt, If You're Up for It
Car video reviews:
Coverstory

Most of us know Arcimoto as an FUV (fun utility vehicle) maker, those funny-looking mini EVs made for both work and fun. And turns out the Oregon-based manufacturer does have an affinity for three-wheelers, as it recently unveiled another weird-looking vehicle that promises unique features and capabilities. It is an e-trike called the Mean Lean Machine (MLM) and now we have the chance to take a closer, virtual look at it.
7 photos

The Mean Lean Machine electric trike was unveiled about two weeks ago but Arcimoto did nothing but tease and let everyone confused. Very few specs have been revealed so far regarding the e-trike, but now the company’s mechanical designer Leo Cruces follows up with a few more explanations to keep us going until this thing enters production. There’s also new footage released to give us a little taste of how it feels riding the MLM.

Just a little recap of what we know so far: up to two people can ride the e-trike (if you opt for the double seater), which promises insane ranges of more than 200 miles (320 km) on a charge, but only with the help of auxiliary batteries. Arcimoto equipped each wheel of the MLM with a high-torque hub motor and promises world-class technology for its mean trike, as well as a pedal generator that can be used to recharge the battery when you’re in stationary mode. There are no shifter or throttle on the handlebars.

Cruces says the MLM provides impressive stability both at low and high speeds, thanks to the tilting technology, which makes you feel like you’re riding a regular bike rather than a stiff tricycle. He also boasts of the vehicle’s incredible front-wheel traction, which makes it possible for you to ride the e-trike in any conditions, on wet roads, gravel, bumpy trails, you name it.

Arcimoto expects its MLM e-trike to hit the market in the fourth quarter of 2022. We are yet to be told how much it will cost, but you can already pre-order it for a $100 deposit. Meanwhile, you can take a closer look at it in the video below. 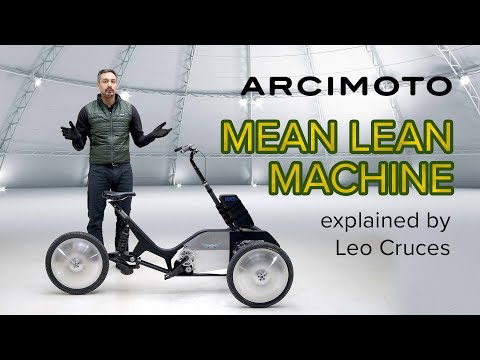