Gabriel Brindusescu
The helmet is the most resistant piece of riding equipment, being designed to take and absorb an impact with the asphalt or other blunt objects the rider’s head might collide with in case of an accident. But have you ever wondered how it does against a firearm?
1 photo
Well, obviously, the relatively thin layer of fiberglass composite that makes the hard shell of a motorcycle helmet can’t deal with a very tiny and very fast piece of metal. But DemolitionRanch received an Arai helmet from a subscriber and decided to give it a go anyway. Heck, who doesn’t want to see a helmet taking the force of a shotgun?

For those cringing at the idea of ruining a fine 600 dollar helmet, Matt, the show’s host says he got it from a subscriber that recently had a motorcycle accident. He’s fine now and apparently the helmet only got scratched. But you know what they say - helmets are one use only, if you take the fall, you replace it.

Matt starts off with a tiny .22 Long Rifle shot out of a pistol. Surprisingly, the round didn’t penetrate through enough to go through and put a hole in the mannequin’s head. It could leave a nasty concussion but no penetration.

The 9 mm round put both an entry and an exit hole through the helmet so the 12 gauge shotgun followed, but it fired birdshot instead of a slug. You’d still think the tiny beads would go through, but you’re wrong. The shell stopped all of them, while the visor managed to absorb most of the damage as well. There were a few holes in it though, but the mannequin inside wasn’t pierced.

If you’re a fan of DemolitionRanch, you’re probably aware that most of these tests end with a couple shots from a .50 cal rifle. For non-american viewers out there, let me put this into perspective. The bullet of a 9mm round weighs between 7.45 grams to 8.04, depending on its type, and gets propelled by at least 518 J. The bullet of a .50 BMG usually tips the scale at 42 grams and some variations can go up to 52 grams while exiting the barrel at around 18,100 J. Enjoy! 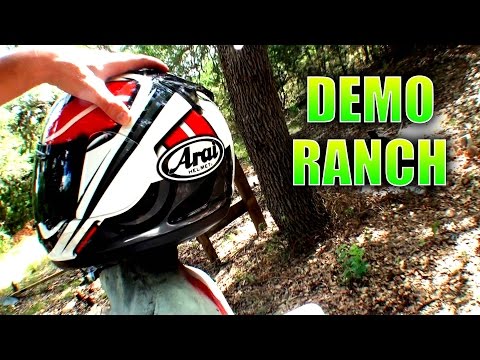