2 With More Than 15,000 Pre-Orders, Aptera Shows How It Handles Shopping

4 Aptera Found a New Place for Its Factory in Carlsbad, California

5 Aptera Luna Lands on YouTube Teasing Those Wanting to Move to Mars
Car video reviews:
Up Next

California-based startup Aptera Motors took its solar electric vehicles (SEVs) to the track for some dynamic testing ahead of production, which is scheduled to kick off later this year.
7 photos

Revealed at the end of 2020, Aptera’s solar electric vehicle underwent several transformations and upgrades, with the company releasing several versions of it. Three Alpha prototypes to be more exact: the Noir, Sol, and the Luna. The Beta versions of the SEV followed and we now see them being put to test on the track.

On a video posted recently by Aptera on social media, we see the company doing some extensive dynamic testing of the three-wheeler, with the developing team focusing on all the important aspects such as acceleration, braking, the turning radius of the vehicle, and the likes. The Beta version was joined on the track by the older Alpha models.

As announced in previous statements, the Beta prototype came with the controversial roll cage for safety, which made a lot of people question the strength of the SEV in case of a crash. However, Aptera recently explained that the cage will be ditched once the vehicle successfully passes its brutal stability testing phase. But right now, the idea is to break stuff and test the limits of the vehicle, so a little extra protection doesn’t hurt.

The Aptera solar electric three-wheeler weighs just 1,800 lb. (816 kg), using a composite body that the manufacturer describes as being very strong. In one of the latest roof crush strength tests, Aptera’s composite body had the highest strength of any passenger car on the road, as boasted by CEO Chris Anthony.

Aptera has managed to surpass 15,000 reservations for its solar electric vehicle this December. The company says it plans to start deliveries by the end of 2022.

With a claimed range of up to 1,000 miles (over 1,600 km) on a single charge, the Aptera SEV makes for one efficient and reliable wheeler for daily use. It will be available in several trims and it has room for two passengers and luggage. The SEV can be reserved for $100, with pricing starting at $25,900 and going as high as $50,700, depending on your customizations.

You can watch the track testing of the Aptera in the video below. 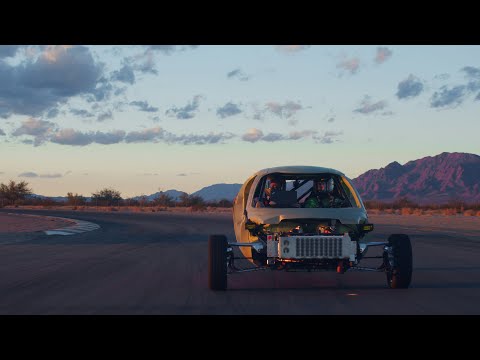