Apple CarPlay on Steroids: iPad Dash Mod Is the Right Way to Start an Audio Upgrade

Bogdan Popa
There are many ways to upgrade the infotainment capabilities in a car, but for many people, it all starts with the screen, especially because it serves as the interface to every piece of technology available in the cabin.
6 photos

The owner of this 2020 Toyota Corolla has turned to aftermarket specialist Soundman Car Audio for the creation of a custom dash mod that would fit the interior of the car and hold an iPad mini in the same place where the Japanese typically install their displays.

In other words, the Corolla is being upgraded with an iPad for a new-gen experience, and the main purpose of the project this time is to allow the installation of a full aftermarket audio system that would be powered by Apple’s tablet.

In theory, the 2020 Corolla already comes with a large screen and support for CarPlay, but an iPad in charge of everything unleashes a whole new set of capabilities, including additional tuning for an aftermarket audio system.

Not to mention that an iPad provides the full iOS experience, unlike CarPlay which is obviously limited to car-optimized apps available in the App Store. And of course, as everybody knows already, not all apps can run on CarPlay, as the likes of Netflix and HBO Max are all blocked in the car.

I know what you’re thinking. Nobody should run Netflix or YouTube while driving, and that’s correct, but on the other hand, there’s no reason not to watch a video when parked and waiting to pick up your kids from school. CarPlay doesn’t come with such capabilities, but an iPad does, so this custom dash project therefore provides the driver with the full package, which makes it such a massive upgrade as long as it’s used properly.

The dash mod obviously looks as premium as it gets, and the gloss panel adds a luxurious touch that you typically expect from factory-installed equipment.

You can learn more about this dash mod in the video below. 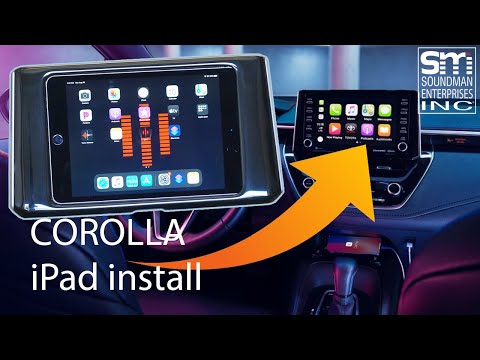