2 Vida-a-Gogo Aims to Reinvent the Electric Scooter, It's Groovy, Smart, and Feature-Rich

4 DarkKnight Cyberfold E-Scooter Is the Two-Wheeled Version of the Batmobile, Can Hit 62 MPH

Driven by the desire to develop the perfect urban commuter, Canadian scooter manufacturer Apollo has created what it claims to be the first hyper scooter, a high-performance, connected beast on two wheels, capable of hitting a speed of 43 mph (approximately 70 kph).
7 photos

Apollo doesn’t care for mediocre electric scooters and has always tried to stand out from the crowd with superior designs and features, claiming that its scooters don’t feel and ride like anything on the market. While that might be a bit of a stretch, I must say that I am impressed with the company’s new addition, the Apollo Pro.

It’s been just a few months since the Canadian manufacturer dropped its City and City Pro models, with the latter being able to go as fast as 32 mph (51.5 kph). Now Apollo is back with its first hyper scooter, a high-performance two-wheeler that is even faster. The scooter was unveiled last month at the Micromobility Europe 2022 conference, and now it's available to reserve.

Apollo Pro comes with a solid, unibody frame made from aircraft-grade aluminum, which can handle a payload of up to 330 lb (150 kg). It is equipped with large, 12” self-healing tires and a massive deck surface area that allows you to comfortably ride the scooter, even with your feet side by side.

Moving on, Apollo boasts of its new electric scooter featuring the first 360-degree lighting system, with all the lights being customizable in the Apollo app.

Things look even better when it comes to the Apollo Pro’s tech features, with the manufacturer saying that this is the first hyper scooter with built-in GPS connectivity, a smart battery management system, and 10 separate sensors. Instead of a display, you’ve got a phone-as-a-display approach, meaning you slide your phone into the dedicated phone holder on the bar and use the app to access all the available features and controls. Not just that, but the holder comes with wireless charging, so you’ll never run out of juice while using the app.

The e-scooter comes with dual hydraulic suspension, drum brakes, and a regenerative braking system controlled via a dedicated throttle on the left side. The throttle helps you brake smoothly and recharge the battery of the scooter at the same time.

Now for the most impressive features of the Apollo Pro: the scooter packs dual 1,200W motors that help the wheeler reach a top speed of 43 mph (70 kph). The 30Ah battery powering it claims to offer ranges of up to 62 miles (100 km) per charge.

But don’t think that Apollo’s new toy offers all of the above at a low price. The Apollo Pro is expected to start at $3,600. Shipping is scheduled to start in the first quarter of 2023, but the scooter can be reserved now for a $20 deposit. Initially, the e-scooter will only be available in North America, but you can contact the company to get notified when it becomes available in your region.

You can take a look at the unveiling video of the Apollo Pro below, just skip to minute 1:43. 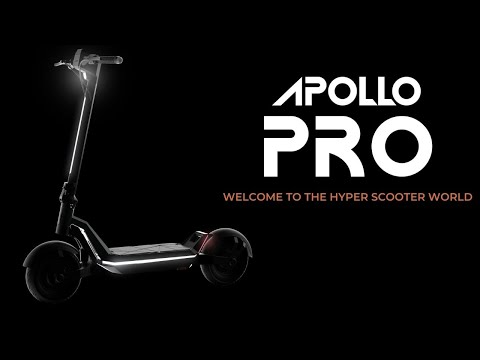