Apocalypse-Proof 2013 Toyota Tundra Meets All Needs, Not the Auction Reserve

Home > News > Tuning
Vlad Mitrache
Toyota is known for making very tough pickup trucks, but nothing you can buy straight out of a dealership will be able to get through a real-life adaptation of the "World War Z" movie. Perhaps a Ford F-650 would come pretty close, but even that will eventually run out of fuel in the middle of the desert.
57 photos

That's why you need tons of jerrycans hanging on the sides of your pickup truck, and if it says "U.S. Army" on them, that's all the better. Because, you know, zombies don't like the U.S. Army, so they won't get near enough your truck to scratch it with their claws or exposed bones. Luckily, this heavily modified 2013 Toyota Tundra is finished in Line-X heavy-duty coating, meaning it can deal with those few illiterate zombies that can't read.

The truck was recently on auction on Bringatrailer.com, but the 50 bids did not push the price past the reserve. The highest bid was $40,100, so anyone interested will have to keep an eye out for a new auction and prepare to fork out over $40,000. However, if you have a look at the list of modifications, you'll probably agree the Tundra is worth it all. And then you browse through the photo gallery and become convinced of it.

Apart from the paint the myriad of rivets, the exterior also gets custom bumpers, skid plates, a roof rack, a seriously strong winch, a bed cap, LED lights, a loudspeaker, and an ARB snorkel. The suspension is lifted by seven inches. Combine that with a three-inch body lift and air suspension, Fox Racing Shox, 20-inch Fuel Hostage wheels, and 37-inch by 13.5 inch Toyo Open Country M/T tires, and there are very few places left on this planet that are out of reach.

It's not as mod-heavy on the inside, but it gets all the things that matter. You've got such niceties as power-adjustable front seats and a 12-speaker JBL sound system, but also factory-built satnav system and a dashboard mount that looks like it can hold anything from a modern smartphone to the first edition of the Holy Bible.

The Toyota is powered by a stock 5.7-liter V8 engine with 381 horsepower and 401 lb-ft (543 Nm) of torque which may not be as earth-shattering as the truck's looks would warrant, but at least it's a robust engine that will keep on going even in the toughest scenarios. And that's precisely what this truck was built for. 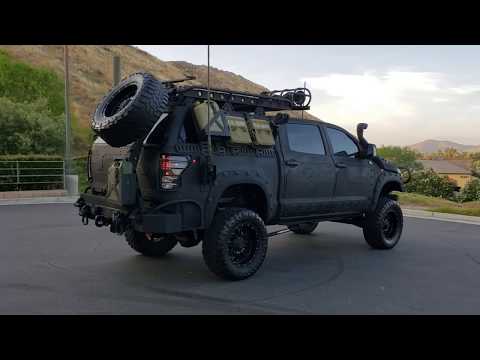 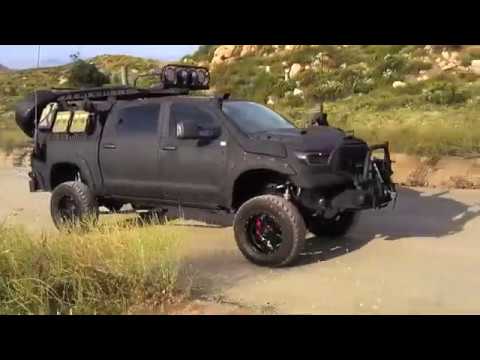