2 Ram 1500 TRX Finally Gets the Upgrades It Deserves, Meet the Apocalypse 6x6 Juggernaut

4 Somebody Paid $220,000 for an Apocalypse Hellfire 6x6 With Cybertruck-Inspired Headlights

When it comes to SUV and pickup truck conversions, 6x6 transformations are a bit of a minefield. No worries, though, as a certain American company is ready for the apocalypse. Or so they say.
11 photos

Meet Fort Lauderdale, Florida-based Apocalypse Manufacturing, the specialized 6x6 company that first came to our attention with its cool Jeep Gladiator 6x6 makeovers of the Hellfire, Sinister 6, and Doomsday variety. Sounds like the custom and tuning worlds are ending, right?

But then, curiously, they did not stop there. And additional craziness ensued, to the tune of Ford Bronco SUV 6x6 Darkhorse conversions. Now, after a little bit of social media teasing where everything was exposed out in the open, Apocalypse is finally officially unveiling the latest bonkers design, their $297k, 850-horsepower Juggernaut. There you go, now an apex Ram TRX predator is acting as the flagship of the company’s lineup.

The looks and specifications were no secret to anyone – including the ability to do 6x6 donuts (as proven by the video embedded below), but the aftermarket outlet probably wanted to make sure there was also a proper, OEM-style introduction to the whole shebang.

So, everything is now adequate, with the Juggernaut tucked inside the online portal with a modified price tag (it was initially listed at $299k) and with its own, separate page where all the goodies are listed in no particular order – yet they can still have a massive impact on the onlooker! 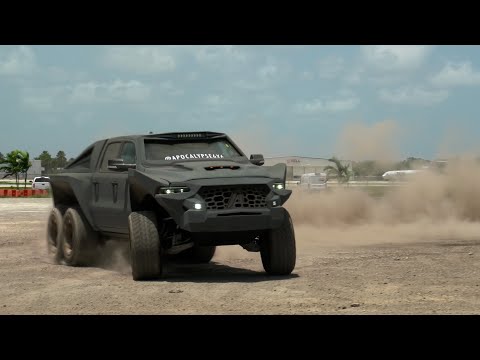