1 Moto2 Class to Have Honda Engines 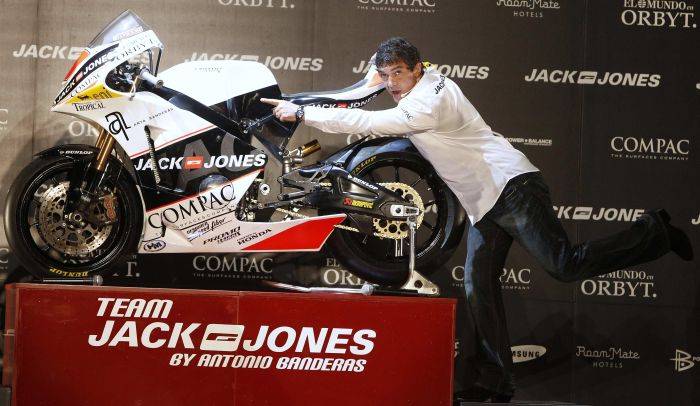 Hollywood legend Antonio Banderas is known to be an avid motorcyclist, having bought his first motorcycle over 30 years ago. But who would have thought the 49-year-old actor will start making business in the motorcycling racing world? Well, that’s exactly what Banderas is up to now, as he recently unveiled his own Moto2 contender.

"I want to be involved with the team where the riders, both Joan and Kenny, have everything they need to compete at the highest level,” Banderas told motogp.com. "I will go to every race I can, but obviously this depends on my professional workload with film and theatre."

"I am a motorcycle lover, and I've been a big fan in recent years. This gave me the opportunity to compete on the inside and I didn't have to think about it!" he continued.

The Jack & Jones Moto2 team by Antonio Banderas will compete on Honda-engined machines in the new 600cc four-stroke class, which replaces the 250cc class. Riding for the team will be Spanish Joan Olive and American Kenny Noyes, who will have their first start the following weekend in Qatar, when the 2010 season will kick-off.

"I think it's very interesting and that we're really going to see the true qualities of the riders,” Banderas was quoted as saying by the aforementioned source. "Everyone has the same engine, which is very powerful and will underline the skill of every team and their technical staff. They will have the opportunity to advance the bikes as they look for the perfect balance for the riders."

Banderas is well known for his roles in movies such as “Philadelphia”, “Original Sin”, “The Mask of Zorro” and “Desperado”.