1 Tesla Wants To Raise Additional Cash This Year, For Model 3 And Gigafactory

Home > News > U-turn
Vlad Mitrache
Back in July, Bobby Blackwolf released a video in which he thanked the Autopilot system for avoiding a crash when the car in front of him braked suddenly. We analyzed the recording and thought the system rather overreacted, causing the Honda behind to crash into the back of Bobby's Model S.
1 photo
Now, another Model S driver believes he was saved a lot of trouble by the Autopilot while he was cruising down a highway in California. We don't know the real name of the Tesla owner, so we'll use his YouTube channel name instead, which is Privaterbok. Privaterbok, then, was driving his electric sedan down in the right middle lane of a four-lane highway with the Autopilot active.

He can be seen approaching a car in the lane next to him to his left that was moving at a slightly lower speed. As he begins to undertake it, the driver of that car attempts to merge with Privaterbok's lane, oblivious to the fact there was another vehicle there. That's what happens when you don't constantly check your mirrors, so you know what's around you, and decide to switch lanes at the exact moment a car is in your blind spot.

Here is Privaterbok's take on what happened: "Driving with moderate traffic, the car on the left lane didn't notice me on his blind spot when he shifted right. I'm still in shock about this, so I can't remember if I steered right, or Model S helped me steer the wheel. I only remember there is a chime warning sound and I immediately take the control and try to avoid the collision."

To be honest, a good driver would not be in shock over a minor incident like this. But I'm not trying to suggest that Privaterbok is a bad driver - not at all. It's just that by using Autopilot, the impact of what would otherwise be considered a casual event is increased tenfold. He isn't sure whether the car avoided the crash or his reactions, but whoever it was, it might have done a better job.

The Tesla only reacts when the other car crosses the lane marking, which might suggest it was the vehicle's systems kicking in. The Model S swerves right once, and after it becomes clear the other car hasn't changed its mind about merging, it swerves once again and only now applies the brakes. Again, an attentive human driver would have reacted sooner (you can see the wayward car moving steadily to the right for at least a full second before the system intervenes), and he would have done it better by reducing the speed and, thus, taking the vehicle off the collision course much safer than by swerving right.

Technically, we have to agree with Privaterbok: the Autopilot did avoid the crash. Did it do it well enough? Well, no, not really, but then again, he doesn't have anyone to blame but himself. Had he been paying attention and keeping his hands on the wheel and foot on the pedals, he probably wouldn't have been in shock at the time he wrote that short text. But it's hard to do that with a car that can drive itself, isn't it? 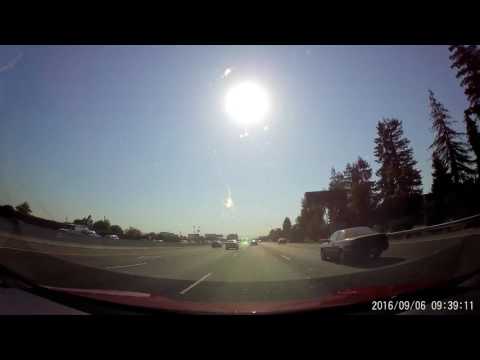