1 Maybe I Don't Want to Be THAT Safe

3 Honda Grom 50 Scrambler Concepts to Be Revealed at Tokyo

5 This Has to Be One of the Most Badass Scooter Exhausts Ever
Car video reviews:
Up Next

Another Beer Crate Bike, but This One Is Fast as Hell

Home > News > Moto
14 Oct 2015, 08:17 UTC ·
by
Small, fast and economical methods of transport are becoming more and more a concern for people who commute. Even if bicycles and small motorcycles are by default among the first choices, wacky projects can be found all over the world.
6 photos

It's maybe a tad too early to declare that beer crate motorcycles are the new fashion in small-range commuters, but seeing more of these funny contraptions IS making us smile broadly.

The second beercycle comes from Germany, which is funny in a way, because the Germans ARE renowned for their beer and their engines/motorcycles/cars. Too bad that those who post these videos seem to be so secretive about their builds. The German beercycle is surprisingly fast
At least, the maker of the Brazilian beercycle we showed you last April was kind enough to offer at least some details and pop open the "hood" of his machine. As far as the German creation goes, we suspect it is motivated by a two-stroke engine that could be sourced from anything, from a chainsaw to a generator, or god knows what.

The most important thing is that the Geman beercycle is incredibly fast, therefore also becoming rather dangerous. The build could definitely use some foot rests and better brakes (at least like the ones on the Brazilian machine).

When it comes to ground clearance, the beercycles may have a disadvantage. Riding on uneven roads or passing a speed bump might prove to be tougher obstacles than meet the eye, not to mention potholes or occasional gravel. And that in case such vehicles would become street legal. As far as the top speed goes, they clearly qualify for highway use, but there is so much more to deal with for homologation.

Titanium-soled shoes might also come in handy, as well as knee and elbow hardshell protectors. Can't speak for everyone, but we'd ride the hell out of such a fast beer crate bike daily! 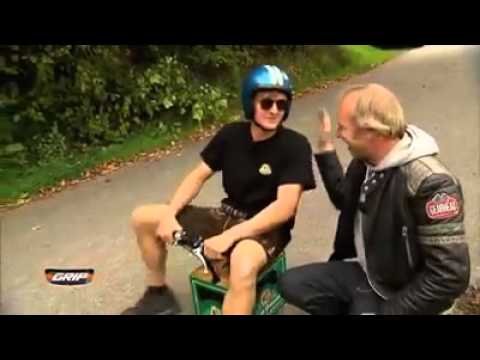